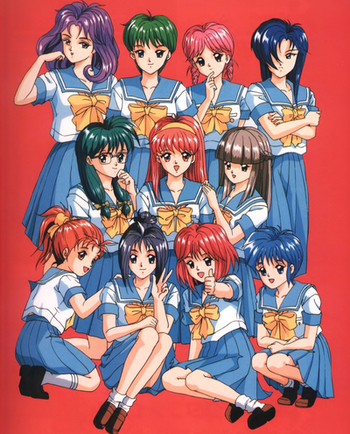 Shiori and the other girls.note Not pictured: Rei.
Advertisement:

Tokimeki Memorial (ときめきメモリアル Tokimeki Memoriaru, lit. "Heartbeat Memorial") is a popular and long-running dating simulation series by Konami, with its first game released in 1994 on PC Engine. That game was a low-profile title which became a hit, thanks to massive favourable word of mouth, and the game appealing not only to the intended teenage male demographic but also the female one, thanks to the game's romantic and funny atmosphere.

In each game, you're playing as a freshman in a Japanese High School, and you'll spend your three years of school time, working on your academic and sports stats, meeting other students of the opposite gender, and wooing them, in the hope of getting the confession of love of one of them at the place of legend of your High School on Graduation Day. This place, varying depending on the game, is said to grant eternal happiness to the new couples confessing their feeling to each other on that specific day.

The games have various characters which fits a basic Trope mold for everyone's tastes: the Childhood Friend, which is usually the one the player character has an aim at at the beginning of the story (and is more or less considered the True Ending), the Mad Scientist, the Megane(ko), the Shrinking Violets, the Student Council President, or the Sempai and Kohai, there are many potential Love Interests you can try romancing!

The series explores various Japanese events and festivals, such as Christmas, New Year, Valentine's Day, White Day, School Festival, Summer Festival, and more. It also depicts a highly idealistic representation of Japanese High School life, and as such is very focused on providing an atmosphere full of romantic, funny and hopeful moments. The few dramatic moments strategically sprinkled in serve as making the romance and hope shine even brighter, as in the Tokimemo verse, hurdles are ultimately overcome, and everything goes well in the end. This light-hearted good balance of narrative elements is one of the main ingredients of the series' success.

The first game was written by Koji Igarashi (a.k.a. IGA), before he took over the Castlevania series; and the Drama Series (spin-off games of the 1st game) had Hideo Kojima as one of their directors and used the Policenauts game engine. Mikio Saito (alias Metal Yuhki), the music composer of Castlevania: Rondo of Blood, is the music composer, and later one of the producers of the Tokimeki Memorial series.

2017 saw a new spinoff for the franchise; like how its sister series Girl's Side has the Idol Singer-focused Tokimeki Restaurant, the prime series has Tokimeki Idol

, a Rhythm Game about training up-and-coming schoolgirls into becoming the superstar idols of their dreams.

Now with its own Character Sheet.

Must not be confused with the Shōjo manga Tokimeki Tonight, nor the H-Game, Tokimeki Check-in.