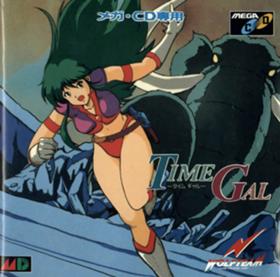 Ice Age? More like Not-So-Nice Age!
Time Gal is a Full Motion Video game in the vein of Dragon's Lair, originally developed by Taito for arcades in 1985, with the animation done by Toei Animation and Studio Junio.
Advertisement:

The "plot" revolves around a time bandit named Luda going through different time periods in order to make himself leader of the world in his own time. Another time traveler, 16-year-old Reika Kirishima, aka Time Gal, is out to stop him. There is no hint of this in the actual game, however. Besides the last part, anyway.

The game was eventually ported by Wolf Team to the Sega CD for a Western release in April 1993. It also saw releases on the Pioneer LaserActive, MSX, Sega Saturn and PlayStation. Additionally, Reika has made appearances in Castle of Shikigami 3 and Elevator Action Deluxe as a playable character, and also appears in Arkanoid vs. Space Invaders.