Video Game / What Did I Do to Deserve This, My Lord? 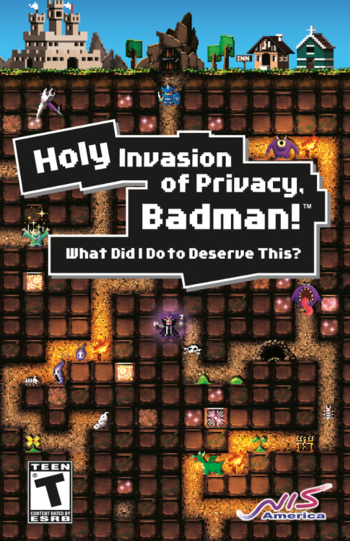 What's an Evil Overlord to do? You just want to be left alone with your schemes to take over the world, but those pesky heroes keep attacking! There's only one answer: Spawn an army of bad guys to defend your home!

The game differs from other "defense" type games, in that it's more of an ecology sim: You dig through nutrient-filled ground to create "slimemosses", which then distribute more nutrients throughout your dungeon, allowing you to create omnoms (which eat slimemosses) and lizardmen (which eat omnoms and lay eggs), etc.etc. etc.

The game is also notable for its sense of humour, with plenty of Lampshade Hanging, ridiculousness and funny profiles.

A sequel was released for download and UMD in spring 2010. There's a third one, for $10.00 on PSN, under the title No Heroes Allowed! And then there is No Heroes Allowed: No Puzzles Either! for the PlayStation Vita, which is a puzzle game variant that is free to play, though small payments are required to increase inventory room and play more frequently per day. There is also No Heroes Allowed! VR, released in 2017 for Playstation VR.

Alternative Title(s): Holy Invasion Of Privacy Badman What Did I Do To Deserve This