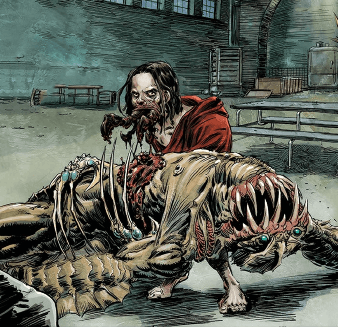 ♫ "It's the Circle of strife..." ♪
"At the end there, when I was trying to cut a deal, the ambassador was scared... That's why he wouldn't come to our aid. That's why we're on our own. Because the demons are afraid of what we're hunting."
— Mayor Bentham Rudgutter, Perdido Street Station
Advertisement:

Humans are the dominant species. We're at the top of the food chain. That means that literally nothing in the world can successfully prey on humans (except maybe other humans). That's part of what makes a lot of monsters scary and badass; they dethrone us from our position of power.

But when you think about it, eating people is kind of old-hat. After a while, you begin to lose track of all the different types of monsters that eat humans. It just becomes a fact of life, so by the time you run into that guy who wants to devour your flesh to add to his own power, you just sort of yawn because it's exactly the same as everything you've seen anywhere ever. So how do you make something distinctive, then? Well, if monsters that eat humans are no longer a threat... what about monsters that eat other monsters? To establish a Food Chain Of Evil, all you have to do is make the last threat the preferred prey of the next one.

This will often result in situations of Horrifying the Horror for the first monster, where it's deathly frightened of the thing now trying to eat him.

Anything which eats monsters that eat humans counts. Basically, this is power tiers established via fictional food chain.

This can also be used in worldbuilding to establish ecological relationships between fictional creatures, in order to make the setting feel more interconnected and dynamic instead of just a collection of fantasy monsters with no relationship with one another. No real species exists in isolation from its neighbors, and only very few creatures don't have at least occasional predators, so showing predator-prey relationships between different monsters can help make a fictional world seem more structured and organic.

Not to be confused with carnivores are evil or Villain Pedigree, although there's probably some overlap with the latter.