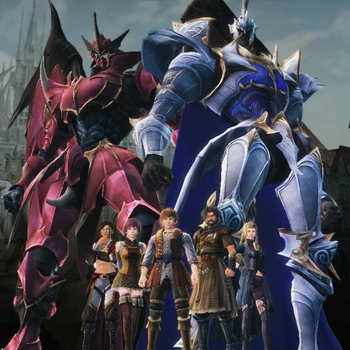 O Wizel, white warrior, wielder of the ancient sword, grant me your power. Verto!
Take your standard Eastern RPG styled adventure, and slap a Guymelef in there as the most badass Limit Break ever.
Advertisement:

White Knight Chronicles is the first game for the PlayStation 3 by developer Level-5, released in Japan on Christmas Day 2008, and in 2010 internationally. You are... well, you — the game features an insanely robust character creator, which was actually used to create every NPC in the game. However, the main character is Leonard, a seventeen-year-old boy of no real importance until, in an effort to save the princess of Balandor, he acquires the Incorruptus "White Knight", a seven-meter tall suit of white and blue armor. What follows is your standard RPG fare, involving princesses, evil conspiracies... and Humongous Mecha.

While the game gathered mixed reviews at launch, it has an impressive cult following due to its long development time and interesting game play, as well as its distinctive Western RPG elements, including (but not limited to) free-roam gameplay, loads of sidequests, and a customizable avatar.

A sequel was released in 2011, which includes the entire first game enhanced with all the new features added in the sequel. Sadly, the online servers are now closed, but the game is good value for your money if you can find it.

, a fan comic that serves as a more detailed telling of the story, and also gives the Avatar character a much larger role.