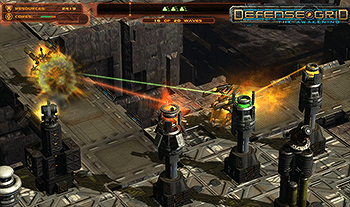 Tower defense games are a sub-genre of strategy games where you defend a building from monsters and/or other enemies using other buildings, sometimes with a unit or two to back you up. Similar to Multi-Mook Melee, Tower Defense games have you facing wave upon wave of "creeps"note ("Creeps" being the term used for random monsters in Warcraft III; as a lot of Tower Defense maps were made for WC3, the name stuck.) until a given number reach their goal, or you survive the final wave.

Creeps will move along the path that is either:

A typical Tower Defense game will have:

As of lately, a trend in this genre has started to develop where the games will feature the ability for the player to be the attacking force pitted against the towers. This sub-genre within the Tower Defense genre has been called "Reverse Tower Defense", "Tower Attack", and "Tower Offense". Some games in the genre get to the point of devoting themselves entirely to this, eschewing the defense element altogether. It is also the basis of the Multiplayer Online Battle Arena, with Defense of the Ancients being basically born as a 5 vs 5 reverse tower defense using Warcraft 3's hero mechanics.

Another form of Tower Defense features a single tower or gate on one side of the screen, which is then beset by the Creeps marching forth to destroy it. The player is usually given one or more weapons directly controlled by them, while upgrades may add automatic defenses and defenders.

The third form of defense game is the "Tug-of-War"/Beam-O-War style. In which there are two towers or bases at each end of one or more paths, and the player(s) and AI send different units down the path to attack the enemy base(s). Opposing units that meet will fight each other, and the object is to push the enemy force back to their own side and destroy their base(s).

Examples of Tower Defense as a Full Game:

Examples of Tower Defense as a Mini-Game:

Examples of Tower Defense games that include the ability to play as the attackers: