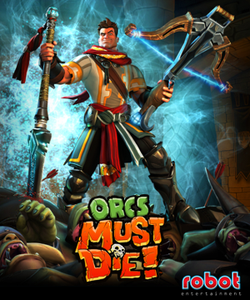 "I've spent 300 years fighting for The Order. I've killed thousands of orcs, and defended dozens of rifts. And THIS is how it ends. One slip on a Kobold's blood, and my skull cracks open on the gatehouse steps. So now the task of defending this fortress falls to my... ngh... Apprentice. That's it then: the world is doomed."
— Cygnus, The Master
Advertisement:

Orcs Must Die! is a Tower Defense game, developed by Robot Entertainment and published by Microsoft Studios. It was released for Xbox Live Arcade on October 5, 2011, and on Steam on October 12. The sequel was released on July 30th, 2012.

In some standard fantasy world, an old War Mage of The Order has slipped on some kobold blood and cracked his head open. Now, it falls to his idiot apprentice to defend a series of fortresses from hordes of orcs and their allies. Within these forts are magic rifts that the orcs must not be allowed to reach.

The game differs greatly from other Tower Defense games, due to its third-person perspective, action-oriented combat, and alternative mechanics. You directly control the Apprentice, and must fight alongside your traps and Guardians instead of merely watching them work their magic. You are given an assortment of traps, spells, NPC "guardians", and a few weapons to help you protect the rifts.

The plot is basically an Excuse Plot to gleefully massacre orcs to your heart's content, not that there's anything wrong with that.

A sequel was released on July 30th 2012, with basically more of everything, a second character choice (The Sorceress), and a co-operative mode.

A third game was released in 2017 titled Orcs Must Die! Unchained, which along with additional characters added Competitive Multiplayer to the series before being shut down in 2019. Tropes relating to the first two games should go on this page, tropes particular to Unchained should go on that page.

Orcs Must Die! 3 came to Google Stadia as a timed exclusive, with other platforms eventually to follow, in August 2020. The game was announced as a return to form, taking after Orcs Must Die! 2's two-player co-op PvE. Taking place decades after the events of Unchained, the game follows two new apprentices, Egan and Kelsey, as they deal with the orc hordes.

Tropes used in Orcs Must Die!:

Tropes exclusive to the Third Game 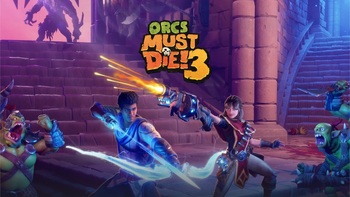