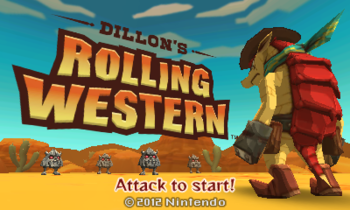 Dillon's Rolling Western is a hybrid of Action-Adventure and Tower Defense genres, developed by Vanpool (who also made Freshly-Picked Tingle's Rosy Rupeeland) for Nintendo and released in 2012 through the Nintendo 3DS eShop.

Things aren't looking good in The Wild West: weird rock monsters called Grocks recently started emerging from the ground to raid the local livestock, and the current defenses are not enough to stop them. It's up to the player character, an armadillo ranger named Dillon, to protect villages with towers and hand-to-grock fighting while gathering resources to fortify the village gates, increase the livestock population, and gather money to upgrade towers and weaponry.

The sequel, known as Dillon's Rolling Western: The Last Ranger, was released in 2013. Another sequel, titled Dillon's Dead Heat Breakers, was made available in Japan in April 2018, and was the first installment to get a physical release. It was eventually released in North America and Europe a month later, though it remained a Nintendo eShop exclusive in North America.