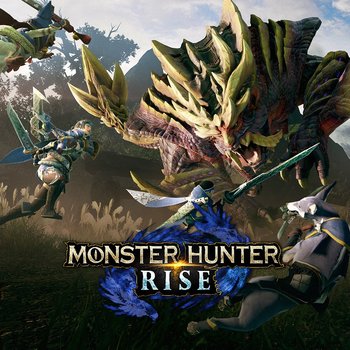 Rise to the challenge!
A huge pack of monsters in a giant stampede...they attacked the village in a frenzied rage. Nobody knows why this happens, but it came close to wiping out our village last time...
— Fugen
Advertisement:

Monster Hunter: Rise is the second base entry in fifth generation of the Monster Hunter series. It was released worldwide on March 26, 2021 on the Nintendo Switch, with a PC port via Steam dropping on January 12, 2022.

Players assume the role of a Hunter from Kamura Village, a Far Eastern settlement that has been struggling to deal with the "Rampage", a sudden onslaught from large groups of monsters that occurs with frightening regularity. With the last Rampage nearly destroying Kamura fifty years ago, Hunters are tasked with investigating the cause behind this disaster, trying to prevent it from happening again, and should the need arise, fighting in the village's defense.

The "Rise" in the title refers to emphasis on verticality with the new Wirebug tool and expanded climbing abilities. The player also gets new companions with the addition of the Palamutes, large canines who focus on attacking alongside the hunter. It features compatibility with Monster Hunter Stories 2: Wings of Ruin.

Beyond the new features, this game aims to strike a balance between classic Monster Hunter and the more modernized Monster Hunter: World. Like World, maps are seamless with no loading screens, camps allow players to access their item boxes, eat meals, and change weapons in the middle of a quest, players may join a quest in progress or allow others to join theirs, and monsters may engage one another in turf wars. However, it also brings back a lot of staples of older Monster Hunter games, such as separate quest lines for solo play and multiplayer, local wireless multiplayer, maps that are designed more around combat with monsters than exploiting environmental features.

The game was accompanied by a trio of compatible amiibo: the companions Palico and Palamute, and the game's flagship monster Magnamalo.

A playable demo of the game was available from January 7 through February 1, 2021, featuring hunts against Great Izuchi and Mizutsune. A second demo was made available from March 11, 2021, until the game's launch, adding a hunt against Magnamalo. Post-launch, several content patchs were released as well, adding even more monsters/variety of hunt types for existing monsters, plus Layered Armor crafting and a new ending to the story.

On September 23rd, 2021, the Monster Hunter Rise: Sunbreak expansion update was announced, featuring a new, more Western setting, and a new flagship known as Malzeno, a vampire-like Elder Dragon. It was released on June 30, 2022 for both Switch and PC, making it the first Monster Hunter title to have a simultaneous release on both consoles and PC. Much like World's Iceborne expansion, Sunbreak has a post-launch lineup with numerous free updates to come.

On December 1, 2022, it was announced that Rise was coming to PlayStation 4, PlayStation 5, Xbox One, and Xbox Series X|S on January 20, 2023, with the Sunbreak expansion arriving later in Spring of 2023.