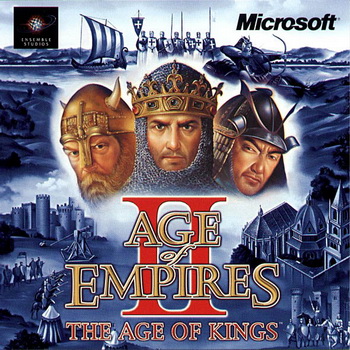 ...
Is the will of one man enough to forge an empire?
Advertisement:

The game retains most of the mechanics and features of Age of Empires: players must build a civilization starting from the initial Dark Age, and progress through the Feudal Age, Castle Age and the Imperial Age. In order to do so, they need to gather resources (gold, stone, food and wood) using worker units, mainly villagers, which can also construct buildings which are used to expand the population limit, research technologies and train units. As players advance throughout the ages, more powerful units and technologies become available. New features introduced in this installment are unique units and technologies per civilization (further distinguishing them), the ability to check the civilization's tech tree and features in-game, and a formation system for military ground units allowing them to march in patterns.

The game is ambiented in The Middle Ages, from Dark Age Europe to The Renaissance, with 13 playable civilizations (Britons, Byzantines, Celts, Chinese, Franks, Goths, Japanese, Mongols, Persians, Saracens, Teutons, Turks and Vikings), and campaigns based on William Wallace, Joan of Arc, Genghis Khan, Saladin and Barbarossa.

An Expansion Pack called Age of Empires II: The Conquerors was released in 2000 and includes five new civilizations (Aztecs, Huns, Koreans, Maya and Spanish), three new campaigns (Attila the Hun, El Cid, and Montezuma) and a selection of various historic battles. In addition, each of the civilizations gained an unique technology, which can be researched at the Castle; these techs ranged from improvements to their unique units to an overall benefit for the civilization.

An Updated Re-release titled Age of Empires II: HD Edition was released exclusively on Steam on April 9, 2013. Developed by Hidden Path Entertainment, it includes The Conquerors and enhanced visuals.

features another five new civilizations (Incas, Indians, Italians, Magyars and Slavs), six new campaigns (Alaric, Barinote only campaign named after a city, rather than a historical character, and one of two campaigns to depict a civilization which was introduced in a previous installment (Byzantines), the other being Alaric, a leader of the Goths, Dracula, El Dorado, Prithiviraj and (Francesco) Sforza) and more historical battles, as well as improved AI, upgrades, and balance fixes. With the release of the HD edition of the original game, Forgotten Empires was turned into an official expansion, entitled Age of Empires II: The Forgotten. It was released on Steam on November 7, 2013.

Another official expansion, Age of Empires II: The African Kingdoms, was released on November 5, 2015, with the Berbers, Malians, Ethiopians, and Portuguese as new civilizations. A third expansion, Age of Empires II: The Rise of the Rajas premiered on December 19, 2016, featuring civilizations in the Southeast Asian region which includes the Khmers, the Malays, the Burmese, and the Vietnamese. The two expansions also feature campaigns depicting leaders from the civilizations (from listed order of civs: Tariq ibn Ziyad, Sundjata, Yodit, Francisco de Almeida, Suryavarman I, Gajah Mada, Bayinnaung and Le Loi).

A Definitive Edition of Age of Empires II was announced in 2018, and was released in November 2019 on Steam and Windows Store. The Definitive Edition includes updated graphics, the 13 civilizations introduced in HD, a new set of challenges for all player levels called "The Art of War", and four new civilizations: Lithuanians, Bulgarians, Tatar and Cumans, alongside a new campaign set called "The Last Khans", depicting how different civilizations dealt with the aftermath of the Mongol invasions initiated by Genghis; leaders depicted include Tamerlane (Tatars), Ivaylo (Bulgarians) and Kotyan Khan (Cumans). In addition, some campaigns from the HD expansions are either replaced or changed note The most significant changes are that El Dorado was replaced by a campaign depicting Pachacuti, while the historical battle Langshan Jiang from Forgotten Empires was replaced by Lake Poyang. The narrations in some campaigns were also changed., as well as fixing factions which were perceived as represented by the wrong civilizations in the old campaigns. An added bonus also returns the Wololo sound for the Monk conversion.

On December 15, 2020, there was an announcement of a new Lords of the West expansion featuring the new Burgundian and Sicilian factions, as well as three new campaigns, which was released on January 26, 2021.

Age of Empires II and its expansions give examples of: