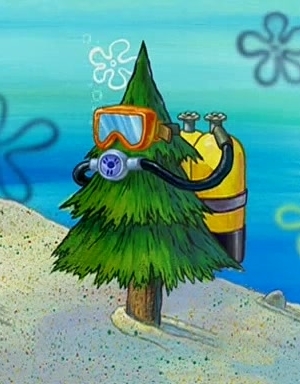 ♪ Sooooo why is there a conifer under the sea? ♫
"They shouldn't even be growing in the same hemisphere!"
— Prof. Summerlee, BBC/A&E TV miniseries adaptation of The Lost World
Advertisement:

Lots of writers put animals where they don't belong. But to most people who aren't botanists, most plants look pretty similar. So you're safe sticking any old plant anywhere... right? Uh, well, wrong. Sometimes writers, artists, or programmers will stick a very specific plant into a scene, and it'll be completely misplaced.

There is some overlay here with Television Geography in live action.

This can be easily justified since many travelers have introduced plants from elsewhere if the new area's climate can accommodate them. For example, relatively few palm trees grow native in the US, and cacti grow only in North and Latin America unless taken abroad. Also, if a work of fiction is set somewhere that's like somewhere in the ancient or medieval world but isn't specifically there, they have an out for including things like potatoes or any other real-life plant: it's not set in the real world. Plant misplacement is especially present in works taking place in rainforests since it's hard to search for the tree species growing in these locations even with the help of the Internet. Not only there are a lot of different tree species unknown to the public, but different rainforests have different trees.

This can come up frequently in Fantasy works set in pseudo-Medieval Europe: it's actually anachronistic for them to have New World crops like tobacco, potatoes, tomatoes, maize-corn, etc. Different Fantasy series handle this different ways, with some just embracing the anachronism.

All Deserts Have Cacti is a common subtrope. May occasionally be the result of Hollywood Provincialism, though filmmakers are careful not to show palm trees growing in places too temperate for them. Viewers aren't that moronic.