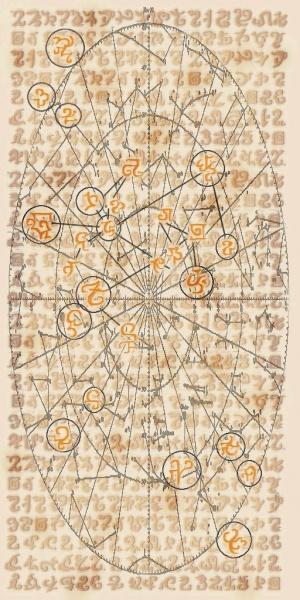 This is what you think an Elder Scroll looks like.
"Go ye now in peace. Let thy fate be written in The Elder Scrolls..."
Advertisement:

The Elder Scrolls is a massively popular Western RPG series produced by Bethesda Softworks. "TES" or "ES" for short, the series is renowned for its Wide-Open Sandbox style of gameplay, allowing the player to play as a heroic or diabolical character, to pursue the main quest with vigor or to ignore it entirely, and to gain prowess and fame through working for factions, guilds, military legions, and even the gods themselves.

According to former series developer Ted Peterson, the name The Elder Scrolls was chosen as the surtitle to Arena simply because "it sounded cool", and it wasn't determined until later in development what an "Elder Scroll" actually was in-universe. ("Fragments of Creation" which simultaneously record past, present, and future events but tend to have nasty side-effects on mortal readers including blindness and insanity.)

The series has a large and industrious Game Modding community, which exponentially increases the content of each game while also fixing bugs, adjusting features to the fandom's liking, and much more, right up to complete overhaul mods.

Since Morrowind, each installment in the series has been released on both PC and console, allowing the series to get into the hands of a wider audience. This also marked the series leap to full 3D.

Bethesda has also produced several other games and media set in the Elder Scrolls universe:

Other Games and Media

An Elder Scrolls Anthology was released in 2013 for the PC. It includes every game in the main series (Arena, Daggerfall, Morrowind, Oblivion, and Skyrim) along with all the add-ons and expansions for the most recent three.

C0DA is an unofficial graphic novel script by former series developer Michael Kirkbride meant to encourage the idea of The Elder Scrolls lore as a living open-source world.

The Elder Scrolls has inspired many world-building projects, such as The Uutak Mythos.

The series has a well detailed Timeline of Events.

The Series as a whole provides examples of: