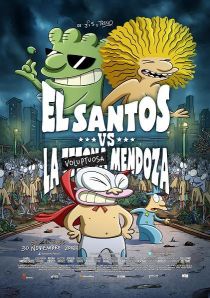 This is the least offensive image about our so-called hero we can put it here.
El Santos is a comic book anthology written by the Mexican artists José Trinidad Camacho (aka Trino) and José Ignacio Solórzano (aka Jis) about the aforementioned character, a very vulgar, over-the-top parody of the famous wrestling legend El Santo (and also about the whole Mexican wrestling world, as a whole).
Advertisement:

Originally appearing in the late Eighties as a weekly comic strip in the Mexican newspaper La Jornada, El Santos is a Mexican wrestler (or luchador) who fights against the forces of evil, both inside and outside the ring, except that he doesn't have any superpower other than being an arrogant Jerkass. One of his biggest rivals is his former wife La Tetona Mendoza, a really ugly and thuggish woman who is one of the few people able to kick his ass on a daily basis, and she's an even bigger Jerkass than El Santos!

The whole comic book is famous (or infamous) for being a no-punches-pulled parody of the Mexican Professional Wrestling world and also of the Masked Luchador genre (especially at the expense of El Santo's popularity) and both Trino and Jis don't have any qualms in using any kind of narrative tropes, no matter how ridiculous they can be.

Besides the books, there's a series of web-episodes about his adventures, and recently, a full-fledged animated movie under the same name of the original books, El Santos contra La Tetona Mendoza was shown in Mexico at November 2012.

NOTE: This article includes tropes from the comic books, the web-episodes and the animated movie.