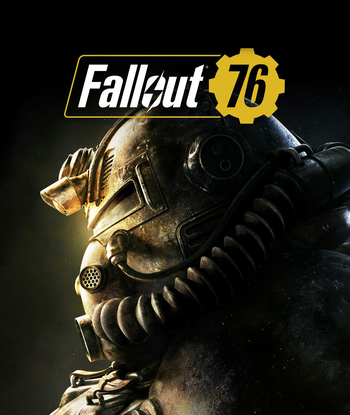 Almost heaven, West Virginia...
"So as we stand here today, we pray that the world will know peace. But if that is not our destiny, if war must come, we stand together knowing that here in Vault 76... our future begins."
— The Newscaster
Advertisement:

Fallout 76 is a Spin-Off game in the Fallout series (and the ninth game in the franchise) from Bethesda Game Studios for PlayStation 4, Xbox One and PC. It was released on November 14th, 2018.

It's 2102, and Vault 76 is an okay place to live. No, seriously, it is! Constructed in the heart of Appalachia to celebrate America's tercentenary in 2076, Vault-Tec really outdid themselves — everything's been running just as advertised since the bombs dropped 25 years ago, and soon the day will come when you reemerge to start rebuilding.

Actually, wait, that was this morning. What time is it? Seems you overindulged a bit at the Reclamation Day party last night, and in the excitement you got left behind. Thankfully, the Vault's still in plenty good shape, and with the help of the robots that have been left behind you're able to get packed and ready at your own pace, picking up your Pip-Boy 2000 and C.A.M.P.note "Construction and Assembly Mobile Platform" on the way out.

You emerge into the lush forests surrounding the Tricentennial Monument at the Vault's entrance, only to find the outside world eerily empty. While the fires of the nuclear holocaust may not have ravaged West Virginia as badly as the rest of the nation, the piles of fresh corpses and roving packs of mutants make it clear that something else did. You'll have to work together with your fellow Vault Dwellers to fend off the hostile wildlife, keep yourselves alive, and make a new life in what remains of Appalachia...

Built using the Creation Engine (retrofitted with Quake netcode), Fallout 76 focuses on survival and building mechanics. Taking inspiration from other survival games like Rust and DayZ, the game allows players play online with up to 32 other players to build settlements, fend off Super Mutants, Ghouls, Deathclaws, and other mutants of the land, and advance through the story presented.

On June 10th, 2019, Bethesda released the Nuclear Winter DLC, which includes a 52-player battle royale where players will fight to the death for the right to become the overseer of Vault 51. Players have to scavenge gear, build structures, and avoid getting killed by other players, the wildlife itself, and the encroaching ring of fire. A later DLC, Wastelanders, dropped on April 14th, 2020 and featured the much-requested return of fully voiced human NPCs, dialogue trees, and an expansion to the main quest involving two factions, the idealistic, friendly Settlers and the ruthless, pragmatic Raiders, vying for a legendary treasure hidden somewhere in Appalachia. Two story expansions, Steel Dawn and Steel Reign focusing on a expeditionary force of the Brotherhood of Steel have also been released. In December 2021, the Night of the Moth update was released, introducing a Cult of the Mothman subfaction. In March 2022, the Invaders from Beyond update was released, re-introducing Zetan aliens to the world of Fallout 76.