Video Game / Family Guy: Back to the Multiverse 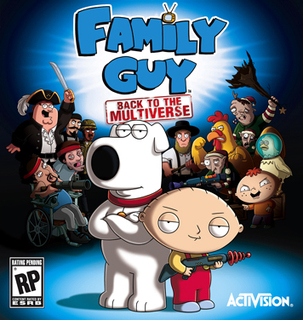 Family Guy: Back to the Multiverse is a 2012 Third-Person Shooter video game based on the animated sitcom, Family Guy. It is a sequel of sorts to the Road to The Multiverse episode of the TV show.
Advertisement:

A Bertram from an alternate dimension arrives in the main Family Guy timeline, out on a mission to destroy any timeline where he doesn't exist. He builds a multiverse-traveling remote control and goes into another universe as part of his plan to lure Stewie into his trap. When Stewie and Brian decide to go find Bertram and kill him, Bertram hires henchmen to kill Stewie and Brian. A couple of these henchmen are characters from the TV show, such as Ernie the Giant Chicken, Long John Peter, and Santa's work-overwhelmed elves.

Stewie and Brian follow Bertram through 8 different universes, including an Evil Counterpart universe, the origin realm of Evil Stewie, a universe where progress has been frozen in The Golden Age of Piracy, and a universe ruled by the Giant Chickens.