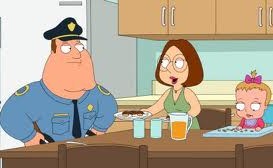 When Bonnie asks Lois to check on Joe and Susie while she visits her father in the hospital, Lois passes the job off to Meg. This go well, but when Joe isn't ashamed to drop her off in front of her school, Meg starts becoming attracted to him. She pushes the boundaries by calling him by his first name and when he doesn't correct her takes it as a sign of being accepted and starts wearing Bonnie's dresses.

When Meg discovers Bonnie will be returning she steals Joe's gun and runs to Maine to plant it into Bonnie's luggage, causing her to be arrested at the airport. During an evening out for dinner, Meg starts talking about having children with Joe and becomes emotional, ending with breastfeeding Susie. Joe takes his concerns to Lois and Peter that Meg is becoming too attracted to him but is dismissed until Lois sees Meg's attraction for herself. When Lois points out that Meg and Joe have nothing in common, Meg agrees and throws herself in front of Joe's squad car in an attempt to become handicapped like Joe. At the hospital, Joe sets Meg straight and Meg apologizes to Bonnie who had been freed to keep getting her token voice work checks.

In the meantime, while at the park, Stewie fails to take revenge on an older boy who insults him when his gun misfires and believes he is losing his edge. He tries to boost his evil side by building an neural-enhancement device but the machine takes Stewie's evilness and concentrates it into a clone. The clone attacks Brian, attempting to choke him and cuts off his tail. When Stewie discovers the clone, he is also attacked and the clone escapes, killing a woman in the process. The clone goes on a rampage, luring the Kool-Aid Man to his death while gleefully drinking his contents. Stewie and Brian lure evil Stewie by tying up Brian. When evil Stewie arrives to shoot Brian with a ray gun, Stewie leaps onto evil Stewie and they fight, tearing off their clothes in the process. When Brian manages to get control of the gun, he is unsure of which Stewie to shoot until he instructs them to look at their feet. When one Stewie looks at his feet and starts giggling, he shoots the other one. As they walk off, the remaining Stewie looks back with yellow, monster eyes as maniacal laughter is heard.

"The Hand That Rocks the Wheelchair" contains examples of (YMMV goes here):