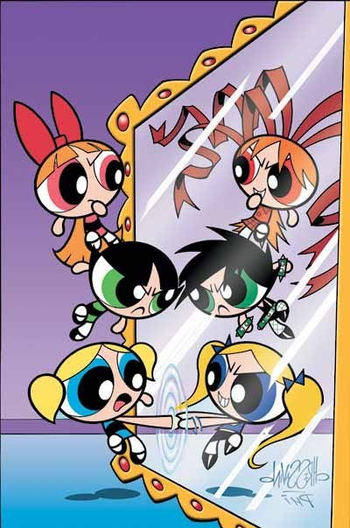 "Mirror, mirror on the wall, who's the evilest of us all?"
The Evil Doppelgänger is traditionally a Mirror Universe counterpart. The double can also be the equivalent of For Want of a Nail: he/they represents what the hero or heroes could become, or may become.
Advertisement:

Sometimes the evil double is a clone and may brood about how he's not a "real" person, just a hollow imitation of the original. If that happens, the clone tends to go mad and try to murder the original to take his place. (Although sometimes a clone may have a case of Copied the Morals, Too.)

The evil doppelgänger is not to be confused with the original doppelgänger. This character is more like the Evil Twin.

See also: Evil Counterpart. Not to be confused with Criminal Doppelgänger. Compare Rotten Robotic Replacement, for (often look-alike) robots replacing humans and causing chaos, and Evil Knockoff, for an evil creation intended to fight the original rather than impersonate or replace them.

Rigby creates an evil counterpart of himself to get rid of his jinx.

Rigby creates an evil counterpart of himself to get rid of his jinx.