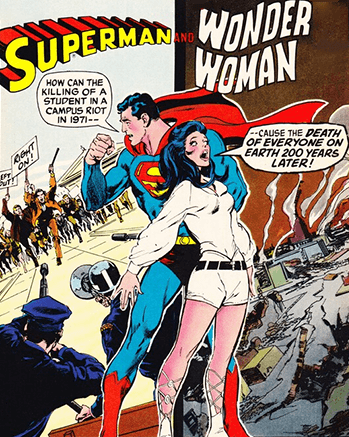 For want of a peace activist, the future was lost.
"You don't have to change much to change everything."
— Mark Rosewater, Magic: The Gathering
Advertisement:

The trope's name derives from a proverb-turned-poem which traces its origins as far back as the 14th century (making this Older Than Print). Probably the most well-known version is the one which appeared in Benjamin Franklin's Poor Richard's Almanac:

A Sub-Trope of What If?, and related to Unwitting Instigator of Doom, Small Role, Big Impact, Dice Roll Death, Set Right What Once Went Wrong and Make Wrong What Once Went Right. A Super-Trope of Close-Enough Timeline and Big First Choice (when the player decides about the nail). If the originals meet their alternates, may result in Other Me Annoys Me or Future Me Scares Me. The It's a Wonderful Plot is a Sub-Trope. See Mirror Character. Often overlaps with In Spite of a Nail, because many stories wouldn't be that interesting if everything was different. Compare It Began with a Twist of Fate and Contrived Coincidence.