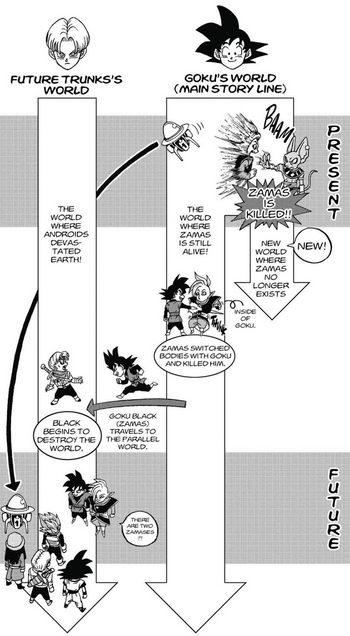 Spock: You are assuming that Nero knows how events are predicted to unfold. The contrary: Nero's very presence has altered the flow of history... thereby creating an entire new chain of incidents that cannot be anticipated by either party.
Uhura: An alternate reality?
Spock: Precisely. Whatever our lives might have been, if the time continuum was disrupted, our destinies have changed.
— Star Trek (2009)
Advertisement:

The Alternate Timeline at its core is different from the Alternate Universe in that it's only one universe, only played out multiple ways. Imagine you're writing something on a piece of paper and made a mistake: you can erase it with an eraser and write over it, or you can grab a new piece of paper. The first one is this trope, the second one is Alternate Universe. The latter presupposes multiverse theory (also known as the "many worlds interpretation

"), whereas the former does not (not necessarily, at least).

This is often caused by Time Travel and For Want of a Nail.

This trope does get a bit confusing on a meta level, when you take an installment and have Alternate Continuities in parallel. To explain, consider two works of speculative fiction: one optimistic and depicts a utopian future, the other is pessimistic and depicts a dystopian future. Obviously both can't happen at once, but until the future arrives they're both equally valid, and both take place in the same world — our world. Basically, the main difference between an Alternate Timeline and an Alternate Continuity is that Alternate Timelines share Backstory and were formed at a point of divergence, with the "new" timeline simply overwriting the "old timeline" as a result of said divergence. In other words: Alternate Continuities do not share the same canon, whereas Alternate Timelines do.

Unlike plain vanilla Alternate Continuity, these kinds of timelines do not necessarily happen due to Adaptation Decay or Adaptation Distillation in moving from medium to medium, but were often chosen deliberately by creators to take a franchise in a new direction while preserving the original material. This can oftentimes prevent a Dork Age. Didn't like that last installment? It was in an Alternate Timeline and really has no effect on your main franchise. Sometimes, these forked timelines can run simultaneously, each providing a different take on the franchise, its characters, and its events. The Alternate Timeline can also be employed as a kind of "soft" Continuity Reboot, creating a new universe while keeping the original in-canon.

If what it diverged from is Real Life, then it's Alternate History. In that case, the Nazis may inexplicably win the war. If this doesn't happen, particularly in Video Games with Multiple Endings, it's called "Cutting Off the Branches". In some stories involving alternate timelines, you can Flash Sideways or meet your Alternate Self. Alternately, if a single diverging event causes the story to switch between two or more different timelines, it's a Split Timelines Plot.

Compare with What If? and Elseworld. Supertrope to Bad Future.