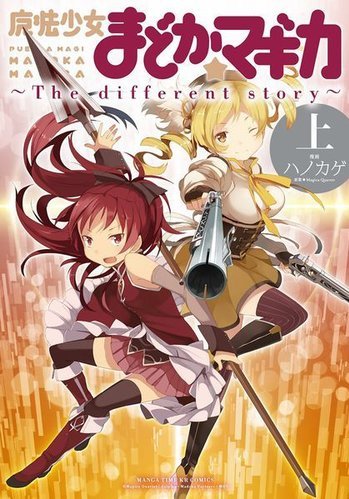 It's all downhill from here.
Advertisement:

Puella Magi Madoka Magica: The Different Story is a three-volume spinoff manga of Puella Magi Madoka Magica written by Masaki Hiramatsu and illustrated by Hanokage. The first volume is based off the anime's third drama CD, Farewell Story, and the second two volumes expand into a What If? storyline centered around Mami and Kyoko meeting again. Like the manga adaption of its parent series, it was released volume by volume in October and November of 2012.

Mami Tomoe, a veteran magical girl, is out on a witch hunt when she saves another magical girl, Kyoko Sakura, from being killed by a witch. After they defeat it, the two girls introduce themselves, and Mami invites Kyoko back to her apartment. Once there, Kyoko asks Mami if she would mind making Kyoko her disciple. Mami is delighted, and the two of them begin fighting together as allies and friends.

But there are many sacrifices that all magical girls must make, and the consequences of Kyoko's wish are spiraling out of control. Because of this, Kyoko becomes angry and bitter, and she and Mami get into a fight, ending in Kyoko leaving Mitakihara City for good.

Until a certain blue-haired girl makes a contract, that is...

The series has been licensed by Yen Press, and all three volumes have been released in North America as of October 28, 2014.

Tropes in Puella Magi Madoka Magica: The Different Story include: