Manga / Dragon Ball: That Time I Got Reincarnated as Yamcha! 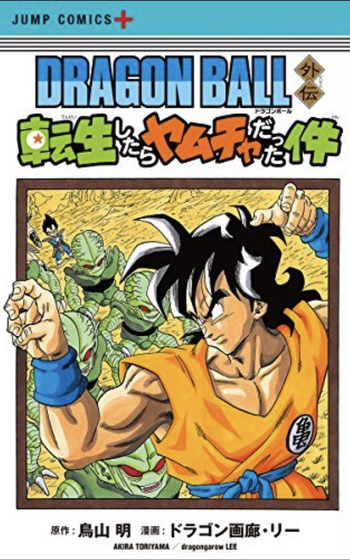 This isn't really Yamcha. It's just a high school kid in his body. Seriously.
Advertisement:

Dragon Ball: That Time I Got Reincarnated as Yamcha! (ドラゴンボール外伝 転生したらヤムチャだった件 Doragon Bōru Gaiden: Tensei-shitara Yamucha Datta Ken) is a spin-off manga written and by Dragon Garow Lee, it is released in Shueisha's Shonen Jump Plus digital manga magazine.

In the real world, an ordinary Japanese high school student is on his way to a Dragon Ball event and makes a detour to hit on a cute girl.

Unfortunately, he meets with an unfortunate and fatal accident before he reaches her and, to his great surprise, wakes up in the Dragon Ball universe as Yamcha! Being a Dragon Ball fan, he knows exactly what misery awaits him as Yamcha, so he takes matters into his own hands and vows to make Yamcha the strongest Dragon Ball character ever!