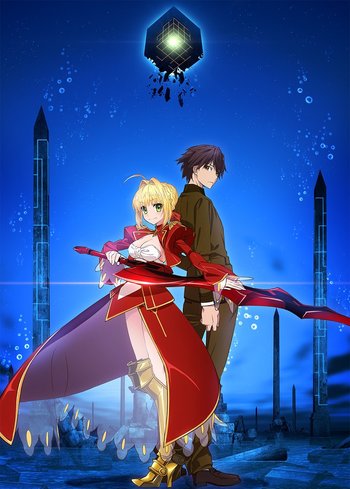 "The Curtains open on a new Holy Grail War of the Moon."
"I ask of you this: Are you my master? No... are you worthy of being my master?"
— Saber
Advertisement:

Fate/EXTRA Last Encore is an original anime story based on the 2010 JRPG Fate/EXTRA. It was written by Kinoko Nasu and produced by Studio Shaft, and first aired in the Spring of 2018.

The timeline of Fate/EXTRA diverges from Fate/stay night sometime in the 1970s, after an incident caused the world's supply of magical energy to rapidly decline. As a result, modern-day magic users called "Wizards" (or "spiritron hackers") have learned to use magecraft within virtual space by drawing power from the Moon Cell Automaton: a mysterious and omniscient alien supercomputer which contains such endless reservoirs of magical energy that it was called the "Holy Grail". The purpose of the Moon Cell was to observe and record the entirety of human history, and if a historical figure was venerated enough by humanity, then it could be digitally recreated as a "Heroic Spirit" equipped with the powers and armaments that personified its legend.

At a certain time 20 Minutes into the Future, a great number of Wizards uploaded their souls to the vast cyberscape of the Moon Cell to take part in a "Holy Grail War". Each Wizard was granted a Heroic Spirit "Servant" as their partner and ally, and together they fought in a single-elimination tournament for the prize of a single wish granted by the Moon Cell's near-omnipotent power.

Hakuno Kishinami is one such participant: a seemingly-average highschooler with no memories and no wish for the Moon Cell. Hakuno is partnered with a boisterous and flamboyant Servant of the "Saber" class who is clad in red and wields a sword wreathed in flame.

Yet a ring of golden light in the sky heralds a fatal error within the Holy Grail War, and now the path to victory is locked at the highest ascent of seven "stratums", each controlled by a Floor Master who must be defeated to progress. With no choice but to ascend or be killed, Hakuno and Saber must fight upwards through the Moon Cell to reach the answers and salvation they both seek at the heart of the Holy Grail.

The first part of the anime adaptation, subtitled Oblitus Copernican Theory, aired on Japanese television from January 27, 2018 to April 1, 2018. This 10-episode arc covers the events up to the end of the sixth stratum. The two-hour finale, subtitled Illustrias Geocentric Theory, aired on July 29, 2018. Netflix picked up the series as a "Netflix Original" and streamed Oblitus Copernican Theory from June 30, 2018 with subtitles and dubs in multiple languages, with Illustrias Geocentric Theory following on October 30, 2018.