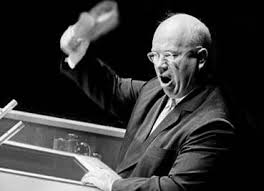 "I told you American imperialists to shoo!"note Yes, the picture is faked. If the shoe-banging incident really happened, it was never captured on film.
"We will bury you."
— Nikita Khrushchevnote Somewhat Lost in Translation. He merely meant that the U.S.S.R. would outlast the U.S. and thus be around to help dig its grave, not necessarily that they would deal the actual killing blow. Not that either actually happened, obviously.
Advertisement:

Nikita Sergeyevich Khrushchev (Russian: Ники́та Серге́евич Хрущёв, April 15, 1894 – September 11, 1971) was the guy who led the Soviet Union after Josef Stalin, after a brief detour via some other guy. In the USSR he was remembered as that utter and incompetent idiot who destroyed the Red Army and was obsessed with missiles, practicing an absolutely idiotic brand of nuclear-blackmail/brinkmanship that nearly killed several hundred million people. In the West, he is remembered as a hotheaded buffoon who pounded his shoe on a table at the United Nations. Whether the shoe-related incident really happened is a matter of some debate, but it has become a symbol of the Cold War anyway. In Russia, he is remembered for his domestic work, particularly his (failed) efforts to improve Soviet agriculture by introducing corn to the USSR, and the Khruschyovkas, low-quality, very cookie-cutter style apartment buildings that were supposed to be a temporary measure to alleviate the housing shortage (they were partially successful in this) until "communism is achieved in 20 years or so". Obviously, this never happened, and many people still live in such buildings today. Finally, by many historians, he is viewed as the last Soviet leader to be a true believer in the cause of communism and who actively attempted to work towards the future promised by the ideology. In contrast, his eventual successor, Leonid Brezhnev, more or less immediately abandoned any idea of building communism by a specific deadline, declaring that the status quo of "developed socialism" would be good enough, and aligned the Soviet Union's raison d'être from a vision of a brighter future to instead be firmly mired in the past; namely that the USSR had triumphed over Nazi Germany and that as such it were their destiny to vanguard against Nazism ever rising in the world again.

Interestingly enough for someone remembered for his failed brand of Nuclear Brinkmanship, personal accounts note him having a particular hatred and fear of war. Although both Khrushchev and Brezhnev, his then-right-hand man, served as Commissars to Red Army military units and were physically present around Stalingrad during the eponymous 1942-3 campaign, neither was actually 'at the front' due to their rank. As the Commissar of the Stalingrad Front at that time Khrushchev was responsible for the morale of the 100,000+ combat and 200,000+ logistics troops serving under General Vasily Chuikov, so his role mostly consisted of paperwork and interviews with high-ranking officers and commissars. That said, both saw their share of unpleasantness in the course of visiting hospitals and attacks by German ground-attack aircraft, which caused many of said visits and interviews to be conducted with additional blood and viscera. This, and probably a sense of lingering guilt about the horribly botched Kharkov offensive operation of summer 1942 (launched by Stalin on Khrushchev's recommendations against professional military advice), caused Khrushchev to become an alcoholic by 1943.

In a classic piece of Khrushchev-ian logic Khrushchev later came to believe that his familiarity with war's horrors meant that he could prove more able to stomach the possibility of a war than someone who had not experienced them (and therefore was even more scared of war) - namely the US President in 1962, John F. Kennedy (who had 'only' served in the Navy). This proved not to be the case, as Khrushchev's harsher experiences seem to have inspired more fear than did Kennedy's.

Following Stalin's death in 1953, Georgy Malenkov succeeded him as the undisputed ruler of the Soviet Union... for all of one week, after which power was split between Malenkov as premier and Khrushchev as chairman of the Communist Party. Khrushchev soon began amassing power, with Malenkov being left increasingly as a figurehead. Had Malenkov and Khrushchev been able to work together well they would probably have made for a formidable team, thanks to the former's administrative skills and more even temperament; however, Malenkov was hell-bent on staying true to Stalin's legacy, while Khrushchev was just as hell-bent on moving away from it, leading to a power struggle that saw Malenkov deposed as leader (albeit kept on in a mostly ceremonial role as an advisor) early in 1955.

The bravest thing Khrushchev did was give his "Secret Speech" to the 20th Party Congress on the 25th of March 1956. In it he denounced Stalin's elevation of himself to godhood, his tyranny, his pettiness, and his incompetence before the entire leadership of the Soviet Union. He had a script, but he got so emotional he couldn't stick to it.note "He was a coward. He panicked! NOT ONCE DURING THE WHOLE WAR DID HE DARE GO TO THE FRONT" Even the original transcript, as read out to people by their managers, is said to have reduced some to tears. Of course, Khrushchev sidestepped the issue of his own complicity in Stalin's policies, let alone that of his audience which included Mikoyan and Molotov. Yes, that Molotov. Molotov and Malenkov would try to mount a coup against Khrushchev the following year in an attempt to restore Stalinism, but it failed and resulted in both being Reassigned to Antarctica (more specifically, Molotov ended up as Ambassador to Mongolia, while Malenkov got the even more humiliating job of managing a hydroelectric plant in Kazakhstan).

He was a very avid technophile, and championed experimental and unconventional research programs like the ekranoplan

prototype known to the West as the Caspian Sea Monster

Outside the Soviet Union, the reviews were not good from all those commies who had idealized Stalin, with China's Mao Zedong denouncing the speech and Khrushchev's de-stalinization initiatives as "revisionist" and a deviation from ideological orthodoxy. Khrushchev also supported a policy of "peaceful coexistence", which was based on the radical notion that blowing up the world would be bad. In the paranoid climate of the Cold War, that sounded like capitulation to China, Albania, and North Korea. Soon, the Sino-Soviet split developed. On the other hand, it allowed Soviet-Yugoslav relations to recover after the Tito-Stalin split (after Khrushchev, ever the happy Sentimental Drunk, got hammered with the rest of the Soviet delegation at a summit in Belgrade and plied Tito and his aides with drink and pleas to "drink up and let bygones be bygones").

Other notable events of his time in power include the launching of Sputnik and Yuri Gagarin's orbit around the Earth. On a less positive note, he crushed the Hungarian Revolution of 1956 — his first instinct had actually been to try using economic pressures to make the new government play nice to the Soviets, but Yuri Andropov, the Soviet ambassador to Hungary and future head of the KGB, strong-armed Khrushchev into putting down the revolution by force, as he would later do to Khrushchev's successor over the course of similar crises — and oversaw the construction of the Berlin Wall. A similar disaster was averted in Poland, where, after some violently suppressed workers' strikes and tense negotiations, a relatively moderate faction of the Communist Party led by Władysław Gomułka came to power in 1956, having convinced Khrushchev that Soviet-Polish relations would not be altered, and that a reformist approach would in fact strengthen communist doctrine in the country (this event is sometimes known as the Polish October). And yes, Khrushchev is partly to blame for the Crimean crisis in Ukraine. Although he was an ethnic Russian, he grew up near the Ukrainian border, his dad frequently took jobs in eastern Ukraine, and he eventually moved there himself and married a Ukrainian woman; as a result, Khrushchev identified strongly with Ukraine in general and the Donbas in particular, and he found it prudent to give away Crimea to the Ukrainian Soviet Republic in 1953. Finally, it should be noted that, although his efforts to improve the Soviet agriculture mostly failednote mainly because he attempted to introduce corn to so-called "Virgin Lands" which were unsuited for corn-based agriculture. This caused several tons of topsoil to just erode, making them even MORE unsuited for farming, the improved relations with the West allowed the USSR to import grain and finally put a stop to the famines that plagued it since The Russian Civil War and the later collectivisation of agriculture in 1929 (and wartime Tsarist Russia before that, what with the over-mobilization and goods-shortage crises).

He's also remembered for his role in the Cuban missile crisis, traditionally as the "loser" to John F. Kennedy. However, Khrushchev didn't make it out of that confrontation as badly as it initially seems, due to a secret deal to remove U.S. missiles from Turkey in exchange for the Soviet missiles in Cuba. But since that deal was, you know, secret, Khrushchev couldn't use it to fight the general (and generally correct, given his litany of horrible misjudgements and diplomatic bunglings which nearly caused World War III) impression that he was incompetent. In the end, he was deposed by more hardline rivals, making him, Malenkov, and Mikhail Gorbachev the only Soviet leaders to leave office before their deaths. If sources are to be believed, the man could be embarrassingly free-spoken and honest about things, something which actually annoyed his own secret police. May be a reason why the other leaders decided to remove him.

Khruschev's time in office is sometimes known as the Khruschew Thaw because political repression and censorship were somewhat relaxed (compared to Stalin's time). Many political prisoners were released from the gulags. A certain number of foreign tourists were allowed to visit the USSR, and Khruschew himself visited the United States in 1959. Furthermore, Soviet citizens were allowed to see how people live in the West, which led to an increased focus on producing consumer goods in the USSR; the people who were more immersed to the imported goods and forming their own tastes became the stilyagi. There was also a certain degree of liberalization in the arts (Khruschev personally authorized the publication of One Day in the Life of Ivan Denisovich), though Khrushev rolled back some of the reforms once he began seeing works he didn't like. Another important aspect of the Khruschev Thaw is the abolition of the troikas, special tribunals operated by security agencies that often ignored procedures and laws. Far fewer dissidents were put on trial; now the methods used to silence them included expulsion from the Party, loss of their job, or forced hospitalization.

Also, he and Richard Nixon had some sort of debate in a kitchen