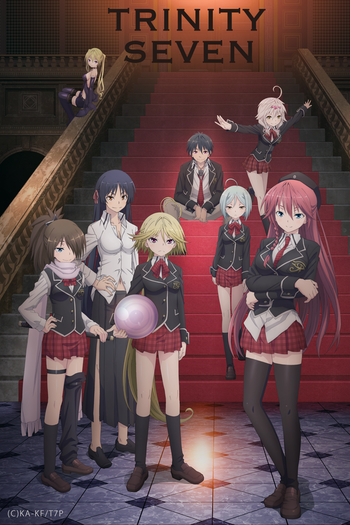 "Time to wake up, Arata Kasuga... or else I will have to kill you."
— Lilith Azami
Advertisement:

Arata Kasuga always thought himself as but another Ordinary High-School Student, everyday routine and all, together with his cousin and childhood friend Hijiri. One day, he suddenly wakes up to find a mysterious black sun burning in the sky. No one seems to find it odd... and soon it becomes apparent to him that something is wrong.

It turns out that this world was an illusory recreation of Astil Manuscript, a grimoire the real Hijiri left behind when the Black Sun appeared and triggered the "Breakdown Phenomenon" which destroyed his hometown only three days before. He was eventually confronted by Lilith Azami, a crimson-haired girl he (and the fake Hijiri) met earlier, who forces him to choose either dispelling the illusion, surrendering the grimoire, and having all his memories of his past life erased... or be executed on the spot for creating the illusion in the first place. However, when the fake Hijiri confesses that the real one is still alive, Arata decides to Take a Third Option: keep the grimoire, become a magician, save Hijiri and stay alive through it all.

To this end he joins Royal Biblia Academy, a Wizarding School where Lilith works as a teacher (despite the fact that she is just Arata's age), where the headmaster is a Chivalrous Pervert, and where he meets "Trinity Seven": a school body composed of seven of its most powerful mages, of which Lilith is one. Thus Arata begins his quest to control the grimoire Hijiri bequeathed to him in order to save not only her but his entire hometown, unaware of what lies ahead.

Trinity Seven: Shichi-nin no Mahou-Tsukai is an ongoing 2010 manga series written by Kenji Saitou and illustrated by Akinari Nao (Psycho Busters). A drama CD was released in September 2011, and was also given an anime adaptation for the Fall 2014 block.