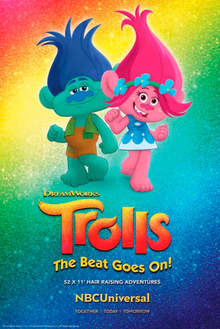 Celebrating who we are
Yeah, we made it through the dark
Harmony is everywhere
Put your hair up in the air!
—>— The show's theme song
Advertisement:

Trolls: The Beat Goes On! is a Netflix animated series produced by DreamWorks Animation, based on their 2016 film Trolls.

The show takes place after the film (and Trolls Holiday) and follows the Denser and Wackier, Slice of Life adventures of Queen Poppy, her boyfriend Branch, the Snack Pack, Bridget, King Gristle, and their fellow trolls and Bergens as they keep the music going in brand-new adventures.

The series premiered on Netflix on January 19, 2018, with six episodes making up the first season. Seven more episodes, comprising the second season, premiered on March 9. After 52 episodes, the show's final season aired November 22, 2019, in time for the movie sequel Trolls: World Tour. There have been two web series of promotional shorts for the series titled ASK POPPY and Trolls: Pump Up the Party!.

A second Trolls series taking place after the events of the second film, exclusive to Hulu and Peacock, followed in November 19, 2020, titled Trolls: TrollsTopia.

The series later showed up in Universal Kids, which celebrated its inclusion with a four-day marathon through the 2020 Thanksgiving weekend.

Trolls: The Beat Goes On! provides examples of:

The opening theme to Trolls: The Beat Goes On!.

Example of:
"Do It Yourself" Theme Tune

The opening theme to Trolls: The Beat Goes On!.