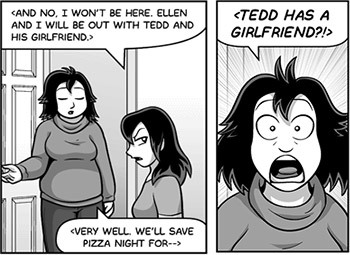 She took that better than expected.
Gonzo: Hey, Bean, what's up?
Bean Bunny: I'm going away... forever!
Gonzo: Oh, great! Could you get me a sandwich? [turns to audience] Would any of you people like anything? Bean says he's going out— FOREVER?!?
— Muppet*Vision 3D
Advertisement:

Alice and Bob are having a conversation. During the conversation, Bob says or does something that you'd think would induce a reaction in Alice; however, she continues right on talking as if it never happened.

That is, until thirty seconds or so later...

Alice just had a Delayed Reaction. Basically, her brain somehow took longer to make a connection that the audience made right away. Bonus points if Alice walks off-screen, then yells something out loud and races back.

Truth in Television, obviously. People with slower reaction times tend to take longer to realize things. Also often tends to happen when people aren't really paying attention to things they should be before suddenly realizing the importance of what they just witnessed.

See subtrope Late to the Punchline when Alice makes a joke, Stealth Pun or Stealth Insult on the expense of Bob and he doesn't get the true meaning right away. See also Post–Wake-Up Realization when Alice wakes up not knowing the situation around her until she fully opens her eyes. Compare I Take Offense to That Last One and Comeback Tomorrow. Compare Delayed "Oh, Crap!" and Explain, Explain... Oh, Crap!. See You Are Already Dead for the combat version. See Repeated Cue, Tardy Response when trying to set up a cue with someone but they missed the cue and they have to repeat it until they get it. Often follows a Beat. Someone else watching may say "Three... Two... One..." as the delay unfolds.

Seen on this very wiki in the form of Fridge Logic, Fridge Brilliance, and Fridge Horror.

It takes Ed at least a day to find out that there isn't enough jawbreakers to share with his friends.

It takes Ed at least a day to find out that there isn't enough jawbreakers to share with his friends.