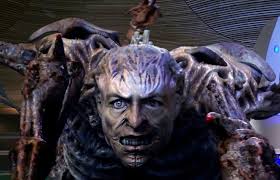 This is what your nightmares look like on ecstasy.
Martha: What'd he do?
The Doctor: Changed what it means to be human.
Advertisement:

The one where the Doctor gets called a geek. And James Bond.

The Doctor, wary of getting too attached to another human, or perhaps of getting another human killed, drops Martha off back home. Her time in the TARDIS is over. However, from the news on her TV he realises that Martha's time period is in danger, and returns only seconds after he left for — ostensibly — one more adventure with Martha.

The activity in question is that of Dr. Richard Lazarus (Mark Gatiss), a brilliant elderly scientist who has devised a way to reverse the aging process. The scientist tests his equipment on himself at a black tie affair, which Martha and the Doctor attend as her sister is Lazarus's Public Relations director. When Things Spin, Science Happens, and Lazarus successfully turns himself into a young, healthy, 41-year-old. Martha's sister is happy to see her boss now looking very young and handsome and snoggable indeed.

Meanwhile, Martha's mother is approached by a suit-wearing guy, who hints that the Doctor is dangerous. He's 100% right about that (heck, he could even have added that the Doctor has a history of absconding with young women, sometimes kidnapping them(!), and that they don't always come home, oh and the Doctor killed Martha's cousin Adeola). This involves the Doctor getting slapped by his companion's mother (again).

Then Lazarus surprises everyone by turning into a massive scorpion/lizard monster?! Martha's sister laments that she was about to snog him and then runs for her life with the rest...

The Doctor kills the scientist with the polarity-reversed age-reversal machine. However, the scary scorpion beast turns out not to be dead after all and flees to a cathedral, where the Doctor kills it again with a church organ.

With the day saved, the Doctor offers Martha yet another "one more trip". Martha says no to the "one trip" thing and the Doctor says "OK!" while jerking his head towards the blue box.

But as the TARDIS takes off, Martha's mum leaves a message on the answering machine not to be with the Doctor, saying the notice came from Harold Saxon...