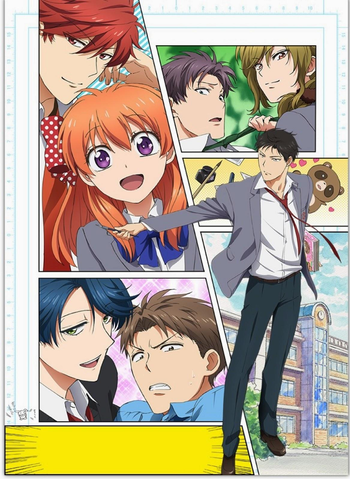 "My name is Chiyo Sakura, 16 years old. I asked the boy that I like out, and he gave me his autograph."
Advertisement:

Monthly Girls' Nozaki-kun (Gekkan Shoujo Nozaki-kun) is a web-published yonkoma shounen gag manga from Izumi Tsubaki, the author of Ore-sama Teacher, published in GanGan Online since 2011 (Daily Lives of High School Boys, No Matter How I Look at It, It's You Guys' Fault I'm Not Popular!) and in print by Square Enix.

Lovestruck high-schooler Chiyo Sakura confesses to her crush, the tall, handsome and mysterious Umetaro Nozaki, who whisks her away to his house—but not for the reasons you'd expect. Turns out he's a renowned Shoujo manga artist and thinks she's a fangirl who wants to be his production assistant! Hijinks ensue as Sakura takes up the role to grow closer to the oblivious Nozaki and meets an array of friends and classmates, each of whom impact the manga Nozaki creates in their own special ways.

While the series is ostensibly shounen, it is also an Affectionate Parody of shoujo manga and its making, and many of the genre's signature tropes, cliches, and stereotypes appear in some way or form.

A drama CD was released in 2013, and an anime adaptation by Dogakobo began airing on TV Tokyo on July 7, 2014 as part of the Summer 2014 Anime season. The anime is available for streaming on Crunchyroll and licensed by Sentai Filmworks (with a dubbed home video release in 2016) and the manga is licensed in the US by Yen Press.