Manga / My Roommate is a Cat 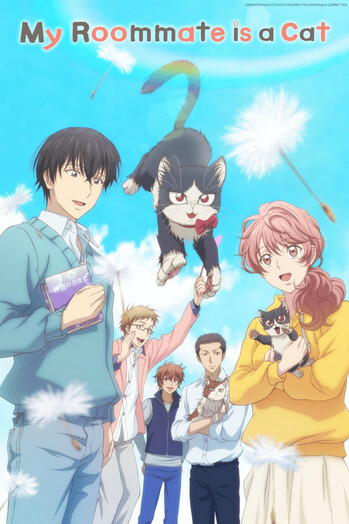 Subaru Mikazuki is a reclusive novelist, content to lock himself away with his writing and avoid people whenever he can. His antisocial nature is only intensified following the deaths of his parents.

"Haru" is a street cat, walking the city and surviving day to day. While passing through a cemetery, she catches wind of food. Food left on the family grave of Subaru's family.

One fated meeting later, and Subaru and this stray feline find themselves a dysfunctional new set of roommates. Between his very reduced existing social circle turning out to be made of cat lovers and the requirements for properly caring for a cat making him meet new people, Subaru finds himself giving people a second chance in spite of himself. Haru, meanwhile, needs to slowly adapt to being cared for by a human and periodically finding herself needing to care for him.

My Roommate Is a Cat (Japanese title: Doukyonin Wa Hiza, Tokidoki, Atama No Ue, "My Housemate Is on My Lap, But Sometimes on My Head") is a manga written by Minatsuki and illustrated by Asu Futatsuya, which began serialization in the shoujo publication Comic Polaris in 2015. It received an anime adaptation in the winter 2019 season.

My Roommate is a Cat

Haru throws books, tissues, and various other items around the house during her temper tantrum.

My Roommate is a Cat

Haru throws books, tissues, and various other items around the house during her temper tantrum.