This Is My Human 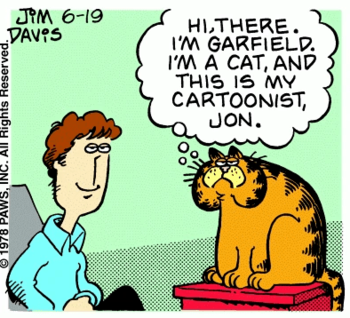 "I get such a kick out of calling him Albert, after Albert Payson Terhune, who wrote all those stupid dog books in which we noble creatures were pets, always being saved by some sappy human — it is my best gambit to make him scream."
— Blood (a dog talking about his human Vic), A Boy and His Dog
Advertisement:

In fiction, oftentimes the protagonists have pets. Smaller (or not so small), less intelligent (or maybe smarter) companions of a different species than the heroes. Sometimes the pet will come along on an adventure and help out. Wait, those heroes are the humans, aren't they?

This trope is where it turns out that the humans aren't as in charge as they think. As far as their supposed pet is concerned, the human is the real pet. The pet may know how the human thinks of the relationship and keep a masquerade going, or it may not care what the hairless ape thinks of things as long as it knows it's the real master.note Cats and dogs in real life do feel like they own any human who spoils them, although they don't really. In rarer cases, the human may even find out that their relationship with their pet isn't quite what they thought.

Related to Dog Walks You, where the pet isn't just being rambunctious. Or maybe they just think they're taking their human out for a walk. Compare Loyal Animal Companion and Humans Are Not the Dominant Species (for when this is literally true). See also Mistook the Dominant Lifeform, which often manifests as aliens thinking this trope is in effect.