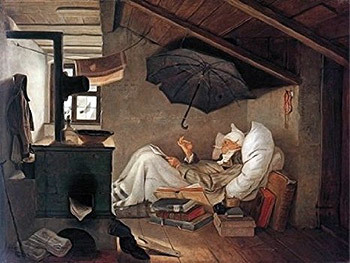 A Starving Artist by a Starving Artistnote Carl Spitzweg, "The Poor Poet"
"I'm a trained actor reduced to the status of a bum!"
— Withnail, Withnail & I
Advertisement:

They've got little money, and lots of talent (or not). Being an artist isn't a career with steady pay, and art supplies are expensive. Artists that haven't quite reached commercial success (or haven't gotten picked up by a wealthy patron) often live poorly.

Due to several influential artists having historically been starving artists, the inherent dramatic potential of being talented but cash-deprived, and the appeal of living a life without material possessions, these portrayals are often quite romantic.

If they've got all of the starving but none of the talent, they're Giftedly Bad. If they are still in art school they are also a Starving Student. If they wear shabby clothes and eat mac & cheese because they're actively trying to project the image of being a struggling artist, they're probably a hipster.

Because Most Writers Are Writers, the Starving Writer is a common protagonist in these circumstances. If combined with One-Hour Work Week (as it often is), the reader may come away with the impression that they'd have a better chance of making money if they ever did any writing.

If the Starving Artist has relatives, expect them to be pushing for the character to "grow up" and "get a real job". Generally, if success is elusive, expect them to eventually take up a steady but unfulfilling job with a boring, bourgeois lifestyle, or to die tragically.

See also Brilliant, but Lazy, for the genius who has no money because they don't apply themselves, and Reclusive Artist.