Abandoned Pet in a Box 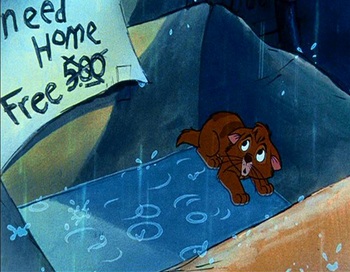 "If it's always once upon a time in New York City, why does nightfall find you feeling so alone?"
Advertisement:

In many works of fiction, there comes a time when a character will be walking along when, suddenly, they see a cardboard box on the side of the road. Inside said box is inevitably an abandoned Cute Kitten or Precious Puppy, left by an irresponsible pet owner, just begging to be taken home. For some reason, they never seem to leave the box even if the cats, especially, could jump out easily.

A kind passerby will fawn over or otherwise react with sympathy for the abandoned animals and may even adopt them; more callous characters will ignore them or mistreat them outright. The animals themselves may or may not get adopted; luckier ones find their forever homes on the sidewalk while less fortunate puppies and kittens may often have to go through further hardships before finding their happy endings.

In Real Life, if you have a pet that you can't take care of, or your situation has changed and you can no longer take care of your pet, don't just leave it in a box; surrender it to a shelter. They'll help the pet find a good, loving home, and care for it in the meantime. If you got your pet from a licensed, ethical breeder, then they will most likely have a take-back policy in which they'll take in and care for the animal while finding it a new home. (Also, unless you're a licensed breeder, spay and neuter your pets, so you won't have an entire litter of puppies or kittens you need to decide what to do with.)

A popular method of introducing a Loyal Animal Companion, or A Pet into the Wild if the poor animal doesn't get adopted right away. Sister trope to From Stray to Pet and Doorstop Baby. See also Girl in a Box, which uses boxes to introduce a likely major character.

When Blu the macaw was only a chick he was discovered by a young Linda in a box on the side of the road which had quite literally fell off the back of a truck.

When Blu the macaw was only a chick he was discovered by a young Linda in a box on the side of the road which had quite literally fell off the back of a truck.