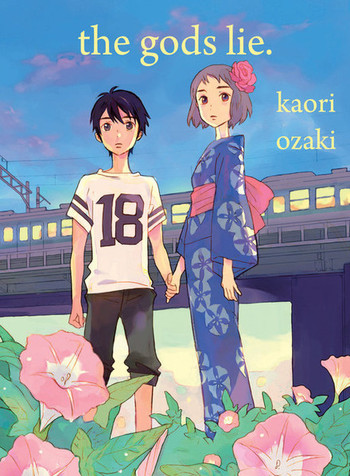 The Gods Lie (Kamisama ga Uso o Tsuku) by Kaori Ozaki is a short 5-chapter manga about a boy's friendship with one of his female classmates. Its chapters were serialized from March to July 2013 in the seinen magazine Afternoon, and compiled into a single volume.

11-year old Natsuru Nanao is a sporty elementary school aged boy. Though he is enthusiastic about playing soccer with his friends, he is less enthusiastic about having to interact with his soccer camp's new coach, a man who makes insensitive comments about his skills and his mother's single status. One day he finds an abandoned kitten in a box and decides to take it home. He can't keep it due to his mother's allergies, but luckily he bumps into a classmate while outside: the tall and secretive Rio Suzumura, who is walking to the grocery store with her little brother Yuta.

Natsuru asks Suzumura to take care of the kitten, and Suzumura agrees in exchange for an exact fee. Natsuru and Suzumura have never interacted much before, but Natsuru goes as far as to skip summer soccer camp in favor of staying at her rundown house, both to help take care of the kitten and to avoid the new coach. The two gradually develop a strong bond over their lack of parental figures (Natsuru's mother is a widow, while Rio and her brother are waiting by themselves for their single dad to get back from a fishing trip), but their happiness together gets upended when the Suzumuras turn out to be hiding a disturbing secret....

The Gods Lie provides examples of: