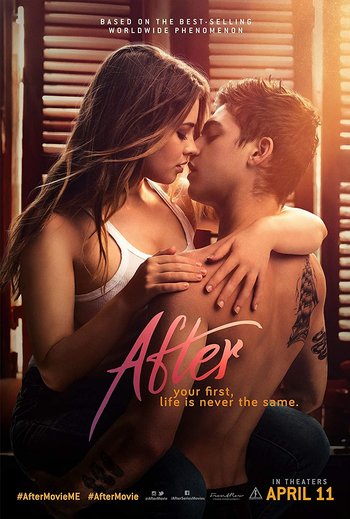 Tessa Young is a sweet girl with good grades and a nice boyfriend. After she moves to college and her roommate convinces her to go to a party, she meets Hardin Scott, who is everything Tessa's mother disapproves of; not only does he have piercings and tattoos, he's a total Jerkass. However, when Hardin saves her from an old man who tries to rape her, Tessa realizes she has feelings for him and they start to form a relationship.

The novel has spawned a series of sequels and prequels, including After We Collided, After We Fell, After Ever Happy, and Before. A feature-length film of the first novel was released in 2019, starring Josephine Langford as Tessa and Hero Fiennes-Tiffin as Hardin; a film of After We Collided followed in 2020. Film adaptations of Fell and Ever Happy completed production in 2021 and prequel and sequel films are in development

Compare Fifty Shades of Grey, another romantic story written by an English author that started off as a fanfic only to evolve into a standalone story and got adapted to the big screen.

The After series contains examples of: