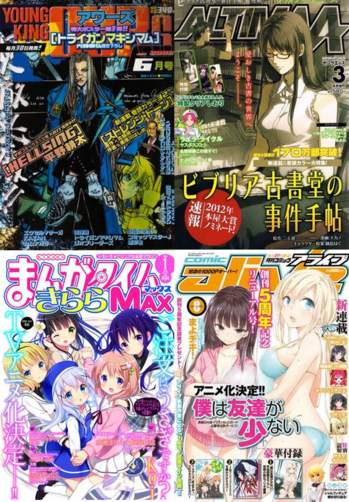 While the boys go out to play, the adults have it their way. note  On the covers: Hellsing, Biblia Koshodou No Jiken Techou, Is the Order a Rabbit?, Haganai
Advertisement:

Seinen (Japanese for "young man" or "young men", and pronounced [ˈseɪ ˌnen], not [ˈsaɪ ˌnen]) is a demographic designation of Manga targeted at male audiences aged 18 to 40. It is the older counterpart of Shōnen and effectively makes for the majority of anime adaptions in the older demographic, since major Josei manga titles are rarely made into anime. Compared to shonen, seinen caters to a much smaller viewing crowd, since younger audiences have much more time to spare on anime, which makes them a more attractive target, and thus is slightly less known.note Ironically, in America this is considered a very lucrative demographic, but with the country's aging population, it means that there just aren't as many people in this demographic to advertise to.

Thanks to the older target audience, seinen shows tend to be much more sophisticated and mature than their shonen counterparts. Much more attention is paid to the plot and the interaction between characters than to action and fightsnote That doesn't mean seinen series don't have excellent action scenes though; many of them such as Berserk and Wolfsmund have extremely detailed and excellently-drawn action scenes., which are the main attraction for most viewers, and the characters are well fleshed out. The latter trait often leads to confusion of seinen with Shoujo but the key difference is that seinen does not idealize romance, instead opting for a more realistic and pragmatic approach to relationships. Realism is indeed the calling card of seinen shows, commonly earning them the acclaim for their depth and maturity and Multiple Demographic Appeal.

A typical seinen protagonist can be of any gender and age (in stark contrast to shonen, whose protagonists are almost exclusively young and male), but tend to be young adults (like its target audience). Romance-wise, anything goes, from Pseudo-Romantic Friendship to obscure examples of Boys' Love. In fact, lesbian characters are a distinctive trait of seinen, rarely if ever present in shonen shows, since many readers of seinen manga are Yuri Fans. Relationships are portrayed in a less idealistic light than in shojo, with many grays and uncertainties like in Real Life, and don't tend to indulge the shonen over-simplification of "which heroine will be hooked up with the hero". Seinen series are also known for the controversial and divisive sub-category of Improbably Female Cast and Harem Series that rely heavily on cutesy Moe elements (again, contrasting with the more blatant fanservice focused on female characters in shonen) to attract viewers. These series tend to be on the opposite side of the Sliding Scale of Idealism Versus Cynicism from the grim type of seinen, instead being fluffy, heart-warming, and comedic.

Compare to the Distaff Counterpart demographic Josei, which is aimed at women in the same age range.

Series sometimes mistaken for seinen note Some of them listed under here also fall into the What Do You Mean, It's for Kids? territory, while others would be considered seinen but for the In Name Only magazine they were published in.