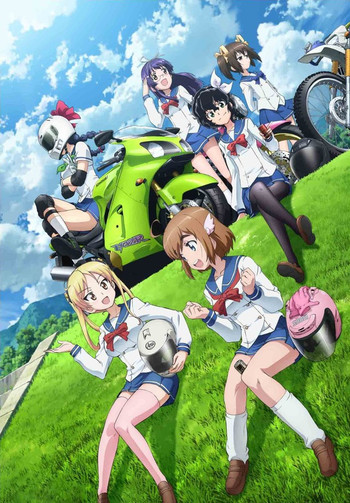 Bakuon!! (ばくおん!!) is a Seinen manga about girls and their motorcycles. It was written and drawn by Mimana Orimoto and serialized in the Young Champion Retsu magazine since 2011. As of 2016 it had seven volumes published. An anime adaptation produced by TMS Entertainment started airing in the spring of 2016, while an OAD was released along the seventh volume. The series is available for streaming on Crunchyroll.

Hane Sakura has to ride her bicycle up several steep hills just to get to her new high school. As she is desperately pedaling, she sees and hears a motorcycle zoom past her and instantly falls in love with it. It turns out that bike was driven by her new classmate Onsa Amano, who decided to attend this school because there is no policy against motorcycles. Not only that, there is apparently a motorcycle club on campus. Hane and Onsa instantly become friends and she is able to convince Hane to start riding a bike. Now the only thing Hane has to do is get a license...