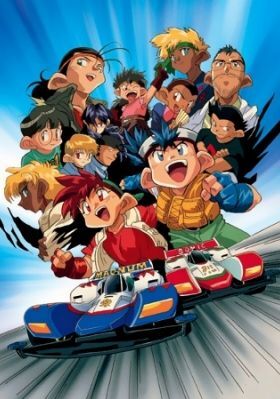 Bakusō Kyōdai Let's & Go!! (The Racing Brothers! Let's & Go!!) is a 1994 manga and anime series produced by Tetsuhiro Koshita in order to promote Tamiya's mini 4WD toyline. A Spiritual Successor of Dash! Yonkuro , it did not get an export to America or become very well known compared to other series, but Let's & Go!! was responsible for the Mini 4WD trend in several countries in Europe and Asia, including Indonesia, Philippines, Italy, China, and Thailand. The story lasts four seasons: Let's & Go!, WGP, MAX (a sequel to WGP featuring new protagonists and story), and Return Racers! (which returned the protagonists to Seiba brothers, but in their twenties/thirties). Bakusō Kyōdai Let's & Go!! remains a Cult Classic for many people.

The stories follows the Mini 4WD racer siblings, Retsu and Go Seiba, who are different as day and night, receive a couple of prototype racing machines, Sonic Saber and Magnum Saber, by the Mini 4WD researcher Professor Tsuchiya, under a condition that they will enter and win a series of Mini 4WD national competitions, the seasonal Great Japan Cup. But things appear to get worse when Prof. Tsuchiya's rival, Prof. Ohgami, a researcher who believes in the idea that racing is to destroy other cars, entered the scene. He sent his representatives to bring chaos to mini-4WD racing society by turning them into battle races. Retsu and Go, along with friends and rivals they meet along their racing careers, struggle against the new trend of vicious racing to prove that true mini-4WD racing should be the way it used to be.

The second season, WGP, is a direct sequel where the Seiba siblings and their friends are elected into the first international mini-4WD Grand Prix in Japan. Japan's representative, the TRF Victorys, led by Retsu Seiba, enter the grand prix and meet many competitors from around the world.

The final season, MAX, follows Gouki Ichimonji, a student of Borzoi racing school, where for the students, mini-4WD racing is to battle and destroy each other. Gouki gets sacked for not using his machine, Max Breaker, for battle racing. Gouki leaves the school and his younger brother Retsuya behind and stays with his uncle. In Gouki's racing career, he meets Marina, a mysterious and serious girl who owns a vicious racing machine, Fire Stinger. note Marina only appears in the anime adaptation; she does not appear in the manga version. The story follows the journey of Gouki, Retsuya, and Marina to have a triumph over Borzoi academy and their immoral ways of racing.

A new manga series, Return Racers, began publication in 2014 to celebrate the 20th anniversary of the series; it returns to the Seiba brothers, but set twenty years after the original series, where Go had became a professional Formula racecar driver, passing the baton of his mini-4WD career to his son Tsubasa, while Retsu, who now works on a space probe, having studied overseas on the suggestion of Dr. Tsuchiya, recalls his last race with Go, as well as facing a previously untold menace that could destroy and reassemble cars at will in process.

Return Racers had also spawned a spin-off manga Let's & Go!! Tsubasa: The Next Racers which began publication on CoroCoro Ichiban! magazine since August 21, 2017. Let's & Go!! Tsubasa focused on Team Pegasus, led by Tsubasa (a character from Return Racers) and Shun Daichi, as they participates in the Mini 4WD racing in both real-life and virtual reality.