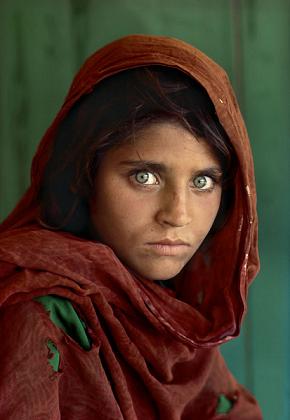 Sharbat Gula aka "Afghan Girl". Photograph by Steve McCurry (National Geographic, 1985)
"I've seen enough movies to know I'm safer siding with the mystery girl with the crazy powers than the army of dudes trying to kill her."
— Jacob Freeman, Shadownova

A plot device that walks and talks. Usually, a Mysterious Waif shows up to develop the plot of an adventure story. For some reason, they draw the eye and attention. Often it's because they are The Woobie and so The Hero decides to protect her and/or help her on her quest. She often serves as a Call to Adventure.

Most often she's of royal birth, or a goddess in disguise. Sometimes unknowingly, as she will often have amnesia. But occasionally you'll just have a common birth waif.

There are two key parts.

It's usually a she, but sometimes a young boy might fill the role — in this case the hero is likely a heroine.

To quote the other wiki: "The word waif (from the Old French guaif, stray beast) refers to a living creature removed, by hardship, loss or other helpless circumstance, from his or her original surroundings. The most common usage is to designate a homeless, forsaken or orphaned child, or someone whose appearance is evocative of same."

So she's somehow been removed from her normal routine and can't go home for some reason. (This is where The Woobie bit comes in.)

The second is that she's mysterious. We (and the hero) usually don't know much about her past, at least until The Reveal at the end. But for some reason, we are drawn to her. She's mysteriously alluring — partly because of the mystery around her. Where did she come from? Why can't she go home? Why won't she tell us about these things? (She's usually scared and doesn't want to talk about her past). A Mysterious Waif is frequently visually distinct from the other characters in some way and likely to double as an Oracular Urchin because odd, fey personalities are common with this trope and making cryptic remarks that only raise more questions goes hand in hand with the Mysterious part of Mysterious Waif. Outright Psychic Powers, or being so good at reading people that you might think they're psychic, are also frequently found in Mysterious Waifs.

Before you know what is happening the hero is getting caught up in trying to help her without really knowing what is happening or what he's getting into. (Expect him to have a serious moment of doubt once he discovers he's gotten into something big and dangerous.) Often involves a Big Brother Instinct aspect. Expect her to be chased by a villainous authority of some sort, usually an Evil Empire, that needs her for some nefarious purpose.

Particularly common in the RPG genre for video games. This character often has other additional elements of appearance and gameplay. See the subtrope Mystical Waif for more details about this variant.