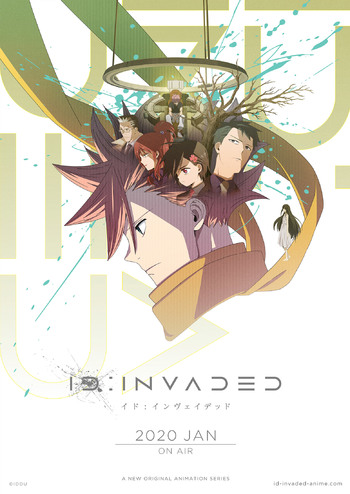 Id:Invadednote as per the katakana on the logo saying ''Ido:Inveideddo'', but stylised as ID:INVADED is an original Japanese anime television series by NAZ that is directed by Ei Aoki (Fate/Zero, Aldnoah.Zero, Re:CREATORS) and written by Ōtarō Maijō. The series premiered on January 5, 2020. A manga sequel by Yūki Kodama (the original character designer), subtitled #BRAKE-BROKEN, was announced on September 4, 2019. The show's official Twitter account announced that the series is coming back on January 2021, suggesting another season.

The show follows a special police task force that uses experimental technology to track "Cognition Particles", emitted by the brains of serial killers at the scene of the crime. By plugging these into a machine called a "Mizuhanome", investigators can dive into the killer's ID-Well (a pun on the Japanese language's double meaning of ido) and interpret the visions within to find the culprit. Though the ID-Wells vary wildly in location and circumstance, the simulation enforces certain rules: upon entering the simulation, the investigator loses their memory of reality and takes on the role of a Brilliant Detective investigating the death of a girl named Kaeru, whose murder always points towards the key to cracking the case.

Oh, and only someone who is a serial killer themselves can enter the ID-Well.

Former cop Akihito Narihisago is the team's resident diver, locked in a cell until he's needed to enter the ID-Wells and take the role of Brilliant Detective Sakaido. He searches not only for the killers' identies, but also for any signs of the enigmatic John Walker: a "creator of serial killers" whose influence overshadows multiple cases.