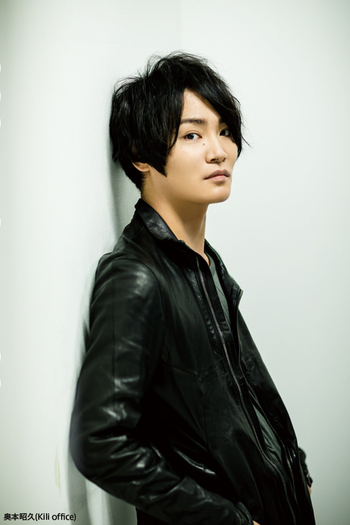 Yoshimasa Hosoya is a Japanese seiyuu born February 10, 1982. He's known to voice a variety of roles from Badass Baritone to younger characters; essentially the youthful answer to Keiji Fujiwaranote Alongside with Tatsuhisa Suzuki.

An interesting trivia note of his career is his Ascended Extra status regarding his involvement in the Yu-Gi-Oh! franchise. He voiced the minor villain Dick Pitt in Yu-Gi-Oh! 5D's, the major villain—turned ally—IV in Yu-Gi-Oh! ZEXAL, and then The Rival Reiji Akaba in Yu-Gi-Oh! ARC-V. Not bad.

He can also be found in sports anime such as Kuroko's Basketball, The Prince of Tennis, Haikyuu!!, and Free!: Eternal Summer (Gundam Build Fighters Try may also count, considering one of the primary premises thereof.)

According to staff and DVD commentary of the No. 6 anime adaption he's a bit of a Cloudcuckoolander, going so far as to call strange ways of thinking "Hosoya Logic". But that was all part of Hosoya's plan to tip the scales in his favor.

In 2017, he took a medical hiatus due to a throat condition, and since then, he has left multiple singing roles. However, instead of leaving altogether, he will continue in Tsukiuta as the Non-Singing Voice for Arata.

Tropes associated with him and most of his characters