Anime / The Anthem of the Heart 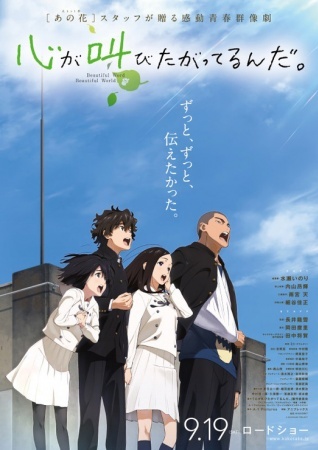 Are you peeking into my heart?note From left to right: Jun, Takumi, Natsuki, and Daiki
"What’s inside the egg? All kinds of feelings locked inside. Then, unable to keep them locked in, it explodes. And the world that’s created then – it is more beautiful than I ever thought."
Advertisement:

The Anthem of the Heart is a 2015 anime film produced by A-1 Pictures. Its original Japanese title is Kokoro ga Sakebitagatterunda. It shares a production staff with Anohana: The Flower We Saw That Day.

After a magical egg convinces young Jun Naruse that her chatterbox tendencies caused her parents' divorce, it curses her so that she can't talk. Fast forward to high school, where Jun, now nearly incapable of speaking, is chosen to be part of the committee for their class's Community Outreach. Joining her on the committee are Takumi Sakagami, an introverted, apathetic boy with hidden musical talent, Natsuki Nito, their school's composed cheer captain, and Daiki Tasaki, the hot-blooded former ace of their baseball team recovering from an injury. After Jun and Takumi bond, the committee decides to do an original musical based on Jun's experiences. The film follows the relationships between these four characters as their high school class works together to put on the show.