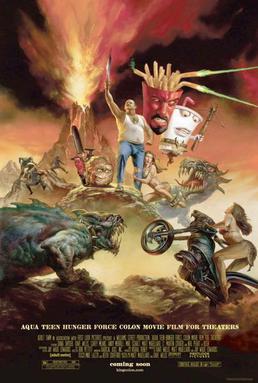 From the 1st Assistant Director of the 2nd Unit of Hellraiser III: Hell on Earth and the Production Assistant of the video "Know Your Fryer"
Frylock: The truth is, Meatwad... I don't know where we came from. (cocks a shotgun) But I do know how we're gonna die!
— Frylock setting the tone for the film.
Advertisement:

The Movie of Aqua Teen Hunger Force, released in 2007. It is the first and, to date, only movie based on an Adult Swim series (and, if one wants to get technical, the second theatrical movie based on a Cartoon Network series, after 2002's The Powerpuff Girls Movie, as well as the last theatrically-released CN movie until Teen Titans Go! To the Movies in 2018).

The movie sees Master Shake, Frylock, and Meatwad fighting off an ancient exercise machine known as The Insanoflex, as well as delving into the origins of the titular squad. Lots of weird stuff happens in-between.

After being trapped in the sphinx for awhile, the Aqua Teens talk in reverse while fighting a huge poodle.

After being trapped in the sphinx for awhile, the Aqua Teens talk in reverse while fighting a huge poodle.