Sitting on the Roof 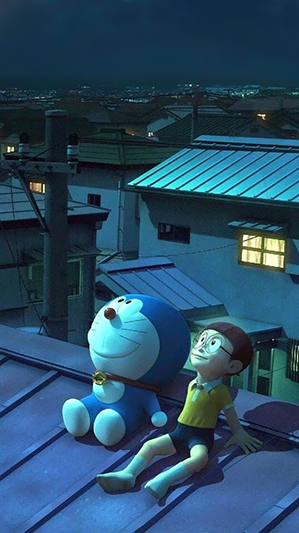 "I can see the page title from here!"
"Right smack dab in the middle of town
I've found a paradise that's trouble proof...
And if this world starts getting you down
There's room enough for two
Up on the roof..."
— The Drifters, "Up on the Roof"
Advertisement:

Sometimes the only option available to a character who desperately needs to be alone is to climb up and sit on the roof of their house. There they can look up at the night sky and contemplate their place in the universe in peace and quiet.

Naturally, everybody and their dog will promptly climb up there after them.

Often when appearing in Western stories, it's to show how the character is a Cloudcuckoolander or a free-spirited dreamer. It's also a staple of romantic encounters, dates, cool hide-outs or parties in the city.

This is often used in modern-day urban settings because it allows for a panoramic view of the character and the skyline without having to travel out of town — which explains why it seldom appears in non-urban settings. It also happens often in Western Medical Dramas, for the simple reason that the rooftop is usually the most quiet place in a hospital... unless it's near the helicopter pad.

Often used in Japanese media. The standard Japanese high school design includes an accessible roof, which is seldom locked in any serious way. Access to the roof is almost always explicitly forbidden, but that doesn't seem to stop anyone. Students and faculty will often find their way up to the roof for private lunches, heart-to-hearts, romantic goings-on, secret supernatural battles, or suicide. It has a chain-link fence to keep people from jumping off, except of course for all the people that do.

Compare (and sometimes overlap) with I Have the High Ground, Rooftop Confrontation, Watching the Sunset and Lying on a Hillside.

Approach with caution in Real Life since pitched roofs can be dangerous and the surface temperature of an asphalt roof can easily reach 120-140 °F (50-60 °C) even in temperate climates.