Manga / The Day of Revolution 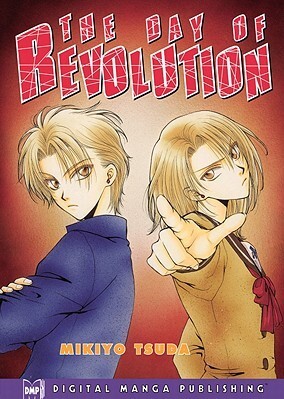 The Day of Revolution is a two-volume manga series by Mikiyo Tsuda about a fairly normal, if scrawny and undersized, high-school boy named Kei Yoshikawa who discovers after a series of fainting spells that he is intersexed and genetically female. (While this could be any one of several real-world conditions, the exact one afflicting Kei is left unspecified.) Faced with the choice (as he sees it) between remaining an "incomplete man" or becoming a "complete woman" Kei elects (albeit reluctantly) to embrace his newly discovered femininity in the hope that a new start as a girl will heal his strained relationship with his cold and distant father.

So Kei takes a half-year off school for therapy, training and "adjustments" (i.e., surgeries) to feminize his body before returning to repeat freshman year as a girl, hoping that by wearing her hair long and pronouncing her name 'Megumi' (which can be written using the same kanji as 'Kei') she can somehow avoid recognition by her former classmates. Naturally, things aren't going to be that easy.

The manga as a whole is a fairly realistic and non-melodramatic depiction of the difficulties inherent in Kei/Megumi's situation.

The Day of Revolution contains examples of: