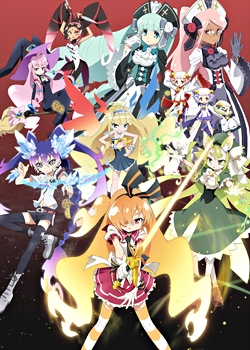 Akari Taiyo is an aspiring fortuneteller following in the footsteps of her late mother. She is very interested in tarot cards and her fortunes have an uncanny accuracy. When she's attacked by monsters, her mother's tarot deck releases its hidden power and Akari transforms by using The Sun card.

Later, she's contacted by the secret magical organization Sephiro Fiore. As it turns out, Akari is from one of the twenty-two bloodlines that wield the power of the Elemental Tarot, magical cards that gain their power from nature. These girls use their powers to protect the balance of the world from the Diabolos Tarot, evil cards that feed on the souls of humans and create monsters called Daemonia.

Unfortunately, those who wield the power of the Elemental Tarot bear a horrible burden, for they are both saviors and executioners...

Tropes associated with the anime: