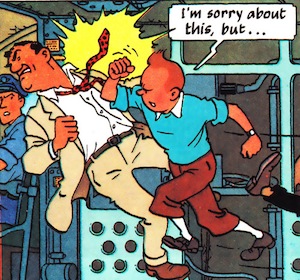 Heroes are, at least for the most part, good people, with clear morals. However, they also have to dish out some punishment now and again, usually directed at people who are decidedly less good, and whose morals are rather lacking, so it's all good.

However, some heroes may feel bad about inflicting any kind of injury on another person, no matter how deserving that person might be. Under these circumstances, the least the hero can do is to let the villain know that, while they may be punching them in the face, they are at least sorry. Very sincerely sorry indeed.

This is even more likely to occur when the character the hero is attacking is not really evil, but needs to be incapacitated for some reason. The hero will say something like "I'm really, really sorry about this," before whacking them over the head or knocking them out in some other way. (In extreme cases, it could even come to a Mercy Kill.)

However, some people will apologize for attacking even the most deranged Psycho for Hire, even if the psycho's actions left that person with no choice but to attack. Perhaps they're simply someone who Apologises a Lot.

Alternately, the attacker might not be a good guy, but is still not exactly evil, and does not want to hurt whoever they're attacking. They might be controlled somehow but are still able to speak, they might have transformed into something with a Horror Hunger that they can't redirect, or they might just be unhappy about attacking someone.

Compare Thank Your Prey, which can easily overlap; Sorry I Fell on Your Fist, where the victim apologizes; Why Did You Make Me Hit You?, where the manipulative attacker merely pretends to feel guilty; and My Fist Forgives You, where the attacker is quickly settling a score. If the attacker apologizes beforehand without explaining why, it's a Preemptive Apology. People Puppets are usually this, if the puppetmaster still allows them to speak while controlling their body.