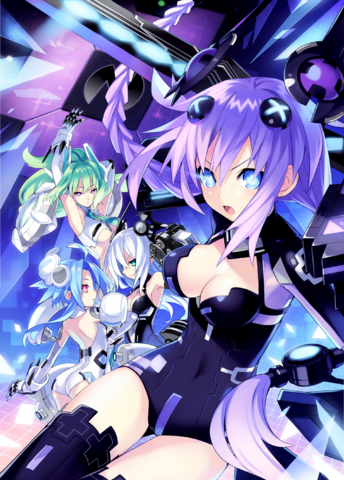 Is your console as moe as this?
Advertisement:

The first game in the Neptunia series, JRPGs featuring moe anthropomorphisms of the 7th generation consoles in a humorous take on the Console Wars.

The game starts off with a battle between the three goddesses - Vert, Noire and Blanc (the personifications of the Xbox 360, PlayStation 3, and Wii respectively) - versus a fourth goddess, Neptune, the personification of the Sega Neptune that never came to be

. Following her loss, Neptune loses her memory and gets turned into a preteen girl. An unknown force then sends her out on a mission to stop the piracy monsters running rampant in the gaming world. To do that, she needs to find a book that holds the secrets of the world... and hopefully win the three other goddesses to her side for good.

Along the way, she gets to meet up with other various people who are the personifications of Gust, Nippon Ichi, Idea Factory, and Compile Heart. 5pb and Red are also available as DLC characters.

Sadly, the game was plagued by issues caused by the complete lack of a budget. Luckily, however, it sold well anyway, and kicked off a series of games that still runs to this very day.

There is also a manga that details the events following the normal ending.

Apparently, the faults of the game were seen by the developers, as three years later, a remake by the name of Hyperdimension Neptunia Re;Birth1 was released for the PS Vita, and later for the PC.

The original was localized by NISAmerica.