Video Game / I Miss the Sunrise

"Where were you when the universe ended?" 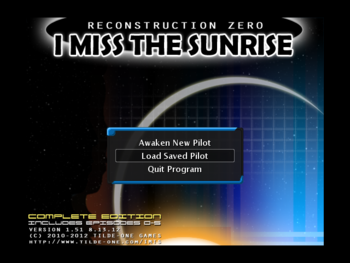 Reconstruction Zero: I Miss the Sunrise is a prequel to The Reconstruction, made by Space Lizard of Tilde-One Games.

Thousands of years from now, mankind had achieved a perfect, utopian society. Marvels of science and technology allowed every need to be cared for and granted worldwide peace. Even immortality had been achieved. Humans traveled to the farthest reaches of the galaxy, discovering a new HumanoidAlien species, the lacertians. In time, they were integrated seamlessly into human culture (though their evolutionary relatives, the "Lessers", were too barbaric to be reasoned with). The dreams of humanity across the galaxy had been achieved, and progress was poised to march ever onwards. Everything was perfect.

But in an instant, that all changed.

A strange, inexplicable event, known only as "the Shine", wrought havoc across all of civilization. A blinding flash of light appeared to warp reality, slicing mechanical constructs and ships into fragments as if it was peeling them apart. For an unknown reason, planets were not affected, but little else was spared from the destruction. Billions died, and relay nodes were destroyed, isolating communication and fragmenting civilization further. In addition, emotions, suppressed for aeons, began to surface, leading to chaos as people tried to fight over what was left. Bandits and marauders fought survivors over the scraps of civilization, and, to make matters worse, the Lessers became far more intelligent, stealing ships and using them to cause even more destruction.

However, emotions are not purely negative. Determination and hope also arose, and with them, a light in the darkness was formed: the Inquiry Project, headed by commander Virgil Sorenson. Its goal is to repair the fractured world to its former glory, to restore peace and order once more. A daunting and nigh-impossible task, to be sure, but they have hope...

You are Ros Ouranos, a pilot with no knowledge of their prior identity. You awake in a stasis pod aboard the Inquiry, and are told you are one of three pilots the crew found in a strange, abandoned ship. Your abilities are unique, as you have a special protein in your body that, when combined with another chemical, grants you the ability to think in a sort of stasis, taking as long as necessary to analyze a situation while appearing to take no time at all from an outside perspective. This is, obviously, an incredibly important ability for a commander to have, and thus, like it or not, you are the Inquiry Project's last hope.

Gameplay-wise, I Miss the Sunrise plays a bit like a blend of an Eastern RPG and a Western RPG. There is an extensive character customization screen for Ros; you can change their gender and make them either a human, cyborg, or lacertian, the latter options having major effects on his/her stats and some changes to dialogue. Perhaps the biggest aspect of customization, however, is the ability to fine-tune Ros' personality — and not just in the bland Character Alignment sense, either. Every character in the game, including Ros, has three separate personality scales: Logical vs. Imaginative, Conservative vs. Aggressive, and Lawful vs. Flexible. And they aren't either/or choices — there are up to ten different steps of the scale that can be used to define where a character stands. The closer you are to another character on the scale, the easier it will be to get along with them. Personality will also slightly change Ros' dialogue during cutscenes. To add on to this, there are some important choices during sidequests that will have far-reaching consequences depending on what you choose, in addition to changing Ros' personality slightly.

Combat is very similar to that of The Reconstruction, taking place in a grid map. Every ship has three meters that serve as both Life Meters and Mana Meters: Hull, Systems, and Pilot. However, every character and enemy in the game has the exact same health value for all three — 1000. The only difference in survivability are defensive stats. There is also no generic "attack" command — every ship must select from a number of up to five weapons to attack. They come in four varieties: Auroral (long range, low damage, high accuracy), Ballistic (medium in everything), Contact (short range, high damage, low accuracy), and eXtension (which are not weapons at all, but passive buffers, similar to armour). Each species specializes in a different type of weapon. You can also create new weapons between missions — doing so is the main method of power progression, in fact.

It can be downloaded here,

in addition to more details on the story,

You can see the trailer here

, and there is also some trivia on the developer's blog here

(beware of spoilers in the latter, obviously).

Do note that, as a prequel to The Reconstruction, there will be unmarked spoilers relating to it ahead. If you want to see the full saga, you should play that game first.

This game is the Trope Namer for the following trope: