Half the Man He Used to Be 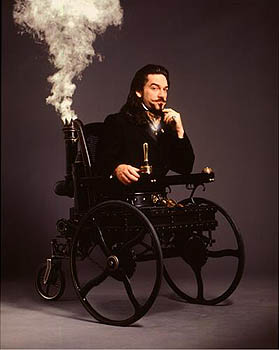 "It's me, dear friends — alive and kicking!
Well, alive, anyway."
"I've lost my better half!"
— Samurai: Hunt for the Sword (outtake)
Advertisement:

A character gets cut (or, less often, blown or ripped) in half, usually during combat but occasionally in an accident, building collapse or some other scenario.

In real life, this would be incredibly bloody. In fiction, this can be done any number of ways, with any level of blood, from family-friendly versions like the battle droids in the Star Wars movies, to Nightmare Fuel-oriented ones that spare no detail. The cutting in half itself can be done either horizontally (at the waist, usually) or vertically (from scalp to groin, or vice versa), with the latter often occurring via Clean Cut. Expect it to be Bloody Hilarious if it occurs in a comedic setting.

Naturally, this happens a lot in anime or video games that feature Humongous Mecha, and many series in general which use Mecha-Mooks, due to the fact that you can slice up mecha all you like without spraying blood everywhere (at least, not human blood).

Expect a character who survives this to become a Memetic Badass; see Who Needs Their Whole Body?.

A frequent result of a Single-Stroke Battle or a Diagonal Cut. See also Saw a Woman in Half, the trick performed by a Stage Magician. Not to be confused with the less literal meaning. Compare Impaled with Extreme Prejudice and Off with His Head!.

Has absolutely nothing to do with The Beatles song "Yesterday", even though the name of the trope is taken from the lyrics, and should not be confused with I Can't Feel My Legs!, which is about losing function, not the actual parts of the body. Same holds true for the Stone Temple Pilots song "Creep", which has the same line in its chorus. Also has no relation to Was Once a Man. A character who can split in half whenever they wish is using Detachment Combat.

This is usually a Death Trope, as you might think, so beware of unmarked spoilers!

Alternative Title(s): Half The Woman She Used To Be