Hammered into the Ground 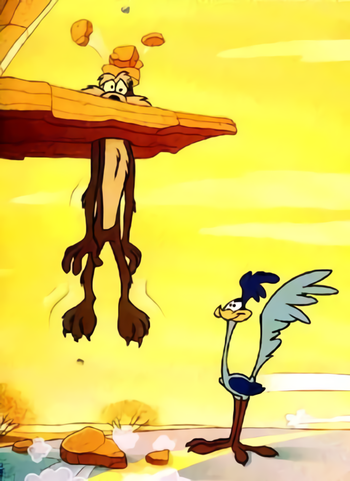 Good thing it's not that rabbit, or he'd ask what's up.
Advertisement:

A situation where a victim would literally be at least partially driven into the ground, whether through an attack, heavy fall, or by any other forceful means. Especially seen in cartoons and in video games, where being driven into the ground can be Played for Laughs. In situations like this, the victim would remain mostly intact, aside from the fact that he is at least partway into the earth. Very occasionally, it is presented seriously, with a target (such as an armored robot) who is "realistically" durable enough to survive this sort of thing.

A variant of this trope may occur when a character is hit extremely hard - they'll be hammered with enough force that they get shot through the earth and will reappear on the other side of the world.

Naruto hammers his hated enemy into the ground.

Naruto hammers his hated enemy into the ground.